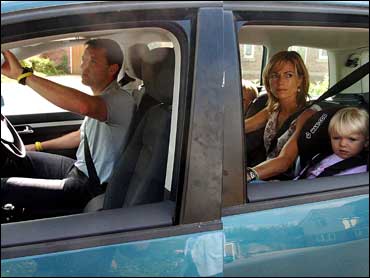 Portuguese authorities moved closer to possibly bringing charges against the parents of missing British girl Madeleine McCann as police handed what they have discovered so far to the public prosecutor.

The attorney-general, who oversees the public prosecutor's office, said after receiving the file on Tuesday that officials would examine police findings and announce within 10 days what further steps were to be taken.

CBS News correspondent Richard Roth reports that for Madeleine's parents, the ongoing Portuguese investigation is lending them an opportunity for what a friend calls a moment of measured calm.

"That's an awful lot of information to go through, over the last few days we've had some unusual interpretations of that information," said Jon Corner, a spokesman for the McCanns.

Portuguese officials will say little more than that the investigation continues, reports Roth, and dramatic claims in the British press that strands of the missing girl's hair were found in the trunk of a car rented by the McCann's weeks after her disappearance are unconfirmed.

"The investigation... is not over, and further detective work is required," Attorney-General Fernando Pinto Monteiro said in a written statement, without providing details.

A McCann family spokeswoman last week said police told the child's mother they'd found what appears to be the 4-year-old's blood in a car the parents rented more than three weeks after their daughter disappeared during a spring vacation in southern Portugal.

However, Portugal's national police chief, Alipio Ribeiro, said Monday night that the forensic tests on the car were not conclusive and that he expected the investigation to continue.

Madeleine's parents, doctors Kate and Gerry McCann, were named as suspects Friday. They deny any involvement and insist police keep searching for their missing girl.

Former Scotland Yard detective John O'Connor told CBS' Early Show Wednesday that the Portuguese investigation was "grasping at straws" by focusing on the evidence found in the car.

The former detective was highly critical of the Portuguese police's investigation. "What they're trying to do is to shoehorn the McCanns into the evidence that they have, and that's not the right way to go about it."

For 16 weeks, police pursued the lead that appeared most plausible: Madeleine was abducted as she slept in the family's hotel room with her twin 2-year-old siblings.

Her parents, who were dining with friends at the hotel's poolside restaurant but said they checked on their children frequently, launched an unprecedented international campaign to find her, striking a chord around the world and raising $2 million to help find their daughter.

But in a stunning turnaround, police last week hauled the parents in for questioning. Forensic tests conducted at a government laboratory in Britain found evidence indicating that DNA from Madeleine was in the trunk of a car the parents used while remaining for months in Portugal's Algarve region, where they got regular updates on the investigation from local police, Justine McGuinness, a spokeswoman for the family, said last week.

The public prosecutor's office said in a brief statement the case was being placed in the hands of an investigating judge within the office, which is usual procedure.

The prosecutor's office can also request specific leads be pursued further, or it can decide to drop the case altogether.

"We can't say with certainty whether it was the blood of person 'A' or person 'B,"' Ribeiro told Portuguese state broadcaster RTP.

However, the DNA match was close enough to alter the course of the investigation, he indicated.

Although police allowed the McCanns to return to Britain on Sunday, officials say they may want to question them again. The McCanns have to inform Portuguese authorities if they intend to be away from home longer than five consecutive days.

Gerry McCann released a statement on his Web site dismissing suspicions he and his wife were involved.

"We have absolute confidence that, when all of the facts are presented together, we will be able to demonstrate that we played absolutely no part in Madeleine's abduction," Gerry McCann wrote Monday in a blog on www.findmadeleine.com.

The McCanns have hired a powerful legal team that includes Michael Caplan, who represented former Chilean dictator Gen. Augusto Pinochet when Spain unsuccessfully tried to extradite him from Britain in 1999.

Until last week, the only formal suspect in Madeleine's disappearance was Robert Murat, a British man who lived near the hotel from which she vanished. He has not been charged, and he has said he is innocent.

The McCanns face further anguish as social service and medical officials in their home town of Rothley, in central England, weigh whether any action should be taken over the care of their other two children.

Officials assess the safety of any children whose parents face criminal investigations, said a spokeswoman for Britain's Local Government Association, speaking on condition of anonymity in line with department policy.

Gerry McCann described the events of the past week as an "unending nightmare."