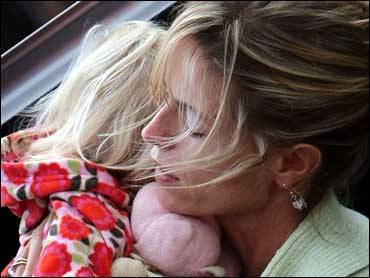 Portuguese police expect to hand their case file on the disappearance of British 4-year-old Madeleine McCann to the public prosecutor's office on Monday, a spokesman said.

"We are getting the case file ready to hand over to the public prosecutor ... by the end of the day," police spokesman Olegario Sousa told The Associated Press. He did not give details of the police findings.

Sousa said he expected the public prosecutor to "quickly decide" on what action to take in the case. The public prosecutor's office decides whether charges should be brought against anyone or whether further investigation is required, or it could decide to drop the case.

In a surprise twist in the four-month-old case, Gerry and Kate McCann were formally named suspects in their daughter Madeleine's disappearance Friday when police said they found traces of blood in the couple's car in southern Portugal, where they had been on vacation.

The British couple returned to England Sunday, and to a storm of media speculation about evidence that police believe ties them to the case.

Four months after leaving for a family holiday in Portugal, Gerry McCann said it was heartbreaking to come home without his daughter Madeleine, despite an extensive effort to find her.

"Whilst it is heartbreaking to return to the U.K. without Madeleine, it does not mean we are giving up the search for her," he said Sunday, his voice shaking.

"We have played no part in the disappearance of our lovely daughter Madeleine," he said.

Kate and Gerry McCann and their 2-year-old twins arrived by minivan at their large brick house in the village of Rothley, 100 miles north of London, escorted by police and greeted by scores of journalists.

CBS News correspondent Richard Roth, reporting from the McCann's home town, says the couple came home with the permission of Portuguese authorities, they said, so their twins can live ordinary lives, to the extent possible.

Madeleine's disappearance, and her parents' high-profile campaign to find her, has attracted attention around the world. The story took a startling twist Friday, when Portuguese police formally named Madeleine's parents suspects in the case.

Roth reports that the Portuguese police's investigation has been widely reported - predominantly by British media - as sloppily managed and lacking in hard evidence.

"The fact that they've been allowed to come home may suggest the case against the McCanns is weak, but it's very much open," said Roth.

Speaking Monday from Glasgow, Scotland, Gerry's brother John McCann told CBS News' Early Show: "We made a plan as a family, that the best with thing would be for the twins to come home. That doesn't mean Gerry and Kate won't be going back to Portugal."

John McCann said Madeleine's parents were "horrified" to learn they were considered suspects in the case. "They couldn't believe it had come to that point. They had collaborated all the way through the last months with the police… It's completely unfounded."

In an interview with a Sunday newspaper, Kate McCann said Portuguese police had pressed her to confess that she had killed Madeleine accidentally, then hid her body and pretended that the girl had been abducted in a massive cover-up.

"They are basically saying, 'If you confess Madeleine had an accident, and that I panicked and hid the body in a bag for a month then got rid of it in a hire care, I'd get two or three years' suspended sentence,"' she was quoted as telling the Sunday Mirror on Friday after her first police interrogation.

Just after the plane carrying the family from southern Portugal touched down at East Midlands Airport Sunday, Gerry McCann said the events of the past few days had been deeply disturbing.

Although Portuguese police named the McCanns suspects in the May 3 disappearance of their daughter, they did not confiscate their passports or restrict their movements.

Gerry McCann said he and his wife had returned home "with the full agreement of the Portuguese authorities and police."

He said the couple wanted "to consider the events of the last few days, which have been so deeply disturbing."

The McCanns have said they will be available to return to Portugal for questioning if needed.

Portuguese police spokesman Olegario Sousa told The Associated Press the McCanns didn't need official authorization to travel because they had provided authorities with their home address so that they could be contacted.

Sousa said the police investigation "is not over by any means."

The McCanns say Madeleine vanished from a hotel room in southern Portugal's Algarve region, where she and her siblings were sleeping, while her parents ate dinner at a nearby restaurant.

Until Friday, suspicion had centered on Robert Murat, a British man who lived near the hotel from which Madeleine disappeared and who was the only formal suspect. No charges have been brought against him, and he has said he is innocent.

The case took a turn in recent days, after police said forensic tests on evidence gathered months after the girl vanished found traces of blood in the couple's car. The traces, apparently missed in earlier tests, were uncovered by sniffer dogs brought from Britain.

The McCanns had said they would not leave Portugal until their daughter was found. But they seemed to have changed their minds even before police named them as suspects.

Gerry McCann said in a separate newspaper interview that he was concerned that their treatment indicated Portuguese police were under intense pressure to solve the case.

"We thought we were in our worst nightmare but now it just keeps getting worse and worse," he was quoted as saying in the Sunday newspaper The News of the World.

"We're desperate to get back for the kids' sake and emotional reasons," he was quoted as saying. "It's not that we're running away."

The couple's ordeal has drawn attention around the world, partly because of an unprecedented international campaign they led to find their daughter.

The McCanns have toured Europe with photos of Madeleine and the child's stuffed animals and clothing, even meeting with Pope Benedict XVI at the Vatican. Celebrities including children's author J.K. Rowling and soccer star David Beckham made public appeals that helped the family raise more than $2 million.