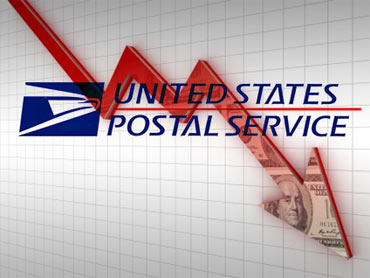 The Postal Service said Friday it lost $8.5 billion last year despite deep cuts of more than 100,000 jobs and other reductions in recent years.

The post office had estimated it would lose $6 billion to $7 billion, but a sharp decline in mail took a toll. Increased use of the Internet and the recession, which cut advertising and other business mail, meant less money for the agency.

For the year that ended Sept. 30, the post office had income of $67.1 billion, down $1 billion from the previous year. Expenses totaled $70 billion, a decline of about $400 million. The post office also was required to make a $5.5 billion payment for future retiree health benefits.

"Over the last two years, the Postal Service realized more than $9 billion in cost savings, primarily by eliminating about 105,000 full-time equivalent positions - more than any other organization, anywhere," chief financial officer Joe Corbett said in a statement. "We will continue our relentless efforts to innovate and improve efficiency. However, the need for changes to legislation, regulations and labor contracts has never been more obvious."

The post office is currently in contract negotiations with two of its unions, with two more scheduled to be negotiated next year.

Mail volume totaled 170.6 billion pieces, compared with 176.7 billion in 2009, a decline of 3.5 percent. At the same time, volume was declining the post office was required to begin service to thousands of new addresses to accommodate population growth and new businesses.

The post office has asked Congress for permission to reduce mail delivery to five-days-a-week and to eliminate annual payments for future retiree health benefits.

Sen. Tom Carper, D-Del., blamed the loss on the recession and "operating restraints placed on postal management." The result, he said, may represent the most serious threat to the post office in its 200-year history.

"If corrective action is not taken quickly, the Postal Service will likely run out of cash and borrowing authority by this time next year, placing its ability to continue operations in serious jeopardy," said Carper, who urged quick congressional action.

Fredric V. Rolando, president of the National Association of Letter Carriers, said the loss "comes as no surprise."

"For the Postal Service to improve its financial situation, the government must let the USPS manage its financial affairs in the most effective manner possible, like any other business," he said. "Essential to that process would be for Congress to fix an onerous congressional mandate from 2006, which obligates the Postal Service to make annual payments of $5.5 billion to pre-fund future retiree health benefits. No other institution in America, public or private, has to do this."

A request from the agency for a 2-cent increase in postage rates to take effect next year was recently turned down by the independent Postal Rate Commission. The post office has appealed that decision in federal court.

While the post office does not receive tax money for its operations it still must answer to Congress, which has been reluctant to agree to closing of local post offices and centers.

Some have suggested privatizing the service, but the requirement to provide service everywhere in the country at the same price is not likely to be attractive to private companies.