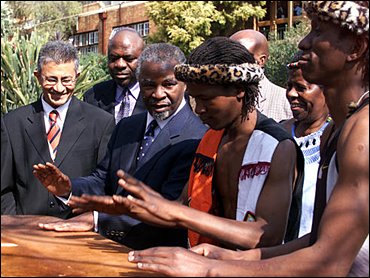 The United Nations development and environmental summit, a.k.a. the Earth Summit, officially opened Monday amid calls for increased international efforts to close the gap between the world's rich and poor.

In a plush convention center ringed by battalions of police and troops and guarded by sharpshooters on rooftops, host president Thabo Mbeki of South Africa said it was time to scrap a world order based on the "savage principle of the survival of the fittest."

Mbeki, who called on Sunday for an end to "global apartheid" between rich and poor, was elected president of the World Summit on Sustainable Development (WSSD) by delegates from nearly 200 nations.

"A global human society based on poverty for many and prosperity for a few, characterized by islands of wealth, surrounded by a sea of poverty, is unsustainable," Mbeki told the U.N. conference's opening plenary session.

Shielded by 10,000 extra police and troops from potential protests and from sprawling, crime-ridden slums, officials made scant progress over the weekend in bridging a wide gulf between hesitant rich states and poor nations demanding more aid and fairer trade.

"Everybody is very pessimistic," one Italian delegate said.

The 10-day summit, billed as the largest in U.N. history, also hopes to agree on ways to halve the more than 1 billion people without access to clean water and the more than 2 billion without proper sanitation. It aims to develop specific plans for expanding the poor's access to electricity and health care, to reverse the degradation of agricultural land and to protect the global environment.

The world clearly agrees that international solidarity is needed to fight poverty and inequality, Mbeki told the delegates.

"The world has grown into a global village. The survival of everybody in this village demands that we develop a universal consensus to act together to ensure that there is no longer any river that divides our common habitat into poor and wealthy parts," he said.

But some activists fear the world's wealthiest nations could sabotage any meaningful attempt to build on agreements adopted at the 1992 Earth Summit in Brazil.

"It's important for us that the vision that was captured at Rio is not eroded," said Goh Chien Yen, with the Third World Network.

In a weekend of pre-summit talks, negotiators tried to resolve contentious issues about who will pay for development.

Developing nations want promises from the West to increase aid and give greater access to its markets, while the United States and other Western nations are resisting any new aid targets in the summit's final plan.

The head of the U.S. delegation, Assistant Secretary of State John Turner, said he was "feeling positive" about recent progress. But he also played down the importance of the summit's final documents, saying they were secondary to the "really historic opportunity" the summit offers to launch "results-oriented" projects.

"We don't see a need for new targets," he told journalists. "We feel action on the ground ... should be the test."

In their opening speeches, both Mbeki and summit Secretary-General Nitin Desai stressed that the final documents must contain specific timetables and targets.

Many environmental activists were disheartened that U.S. President George W. Bush was not among the more than 100 world leaders scheduled to attend. They also blamed the United States for much of the difficulty in reaching agreement.

The United States "can be a catalyst for positive action or a constraint on international cooperation," said Achim Steiner, director general of The World Conservation Union, or IUCN.

Bush's absence has provoked critics to question the commitment of the global superpower and biggest polluter to the green agenda first agreed at Rio de Janeiro 10 years ago.

The European Union has also been criticized for refusing to drop subsidies that protect domestic industries and agriculture, an issue that infuriates many developing nations struggling to get access to European markets.

EU officials note they agreed last year to discuss subsidies at the World Trade Organization. "We do not see Johannesburg as the place to have these negotiations," said EU Commission official Christine Day.

Desai lamented the "implementation gap" between the commitments made at the 1992 Earth Summit and the world's lack of action toward achieving those environmental and development goals.

"There have been some successes some increasing awareness ... but overall the record so far is very poor," he told the delegates.

Poverty and ill health continues, as does environmental degradation, he said.

"We must have this sense of urgency that we have no time to lose," he said.

Thousands of activists planned demonstrations during the summit demanding concrete action. South African Foreign Minister Nkosazana Dlamini-Zuma said Sunday that orderly, authorized protests would be welcomed, but illegal demonstrations would not be tolerated.

"The summit is not a summit for anarchy ... I hope nobody is coming here to test the law," she said.

"In a world ever more interdependent, peace, justice and the safekeeping of creation cannot but be the fruit of a joint commitment of all in pursuing the common good," John Paul said Sunday.