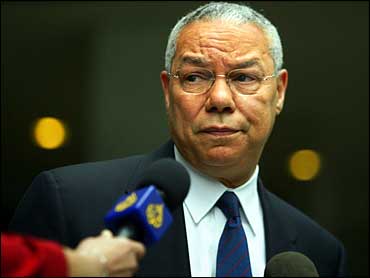 Powell told the BBC World News that Saddam Hussein would have sought weapons if freed of sanctions, and denied the U.S. had any credibility problem because weapons have not been found.

Powell and other administration officials were defending the war as a group of arms control experts accused the administration of misrepresenting intelligence information to justify the war, after the discovery that allegations Saddam had sought uranium in Africa for a nuclear weapons program was based on fabricated information.

"If freed of sanctions and allowed to continue unabated without sanctions, without the international community intervening, he would have continued to pursue weapons of mass destruction," he continued.

"This was a dictator who had gassed people in the past, and, if we had not intervened, would have been developing the capability to gas people in the future, or to use biological weapons against them, or at least to threaten the world with those kinds of weapons," Powell said. "And yes, nuclear weapons."

However, Powell did not say that Iraq possessed actual weapons.

Defense Secretary Donald H. Rumsfeld said Wednesday the administration decided to use military force not because of intelligence pointing to a new threat, but "because we saw the existing evidence in a new light through the prism of our experience on Sept. 11."

Mr. Bush, at a news conference in South Africa on Wednesday, said, "There's no doubt in my mind that when it's all said and done the facts will show the world the truth."

But British officials quoted by the BBC are less confident. They now believe no weapons would be found because they were destroyed before the war.

As the political crisis over prewar claims continues for Prime Minister Tony Blair, former Prime Minister John Major has joined the calls for an independent inquiry into the use of intelligence in the run-up to the war with Iraq, reports CBS News Reporter Charles D'Agata.

"I think it has to be cleared up because it is in the government's interest to clear it up," Major said. "We are in the middle of the war on terror. No-one knows what our troops will be asked to do next."

Blair says he thinks some weapons will eventually be found. But former foreign secretary Robin Cook tells the BBC it doesn't seem credible to him that there is "some big arsenal of weapons" posing a "real and present danger" that hasn't been found.

In Australia, Prime Minister John Howard said the White House retraction of its claim regarding Niger did not undermine the case for sending troops into Iraq. A top intelligence agency, meanwhile, said it had long doubted the claim but didn't tell the government, reports the Australian Broadcasting Corp.

Several U.S. experts have come forward to share the doubts they had before the war.

Daryl G. Kimball, executive director of the private Arms Control Association, said he and others believed "that the administration made its case for going to war by misrepresenting intelligence findings as well as citing discredited intelligence information."

Greg Thielmann, who held a high post in the State Department's Bureau of Intelligence and Research said Wednesday that Iraq posed no threat to the United States or to its neighbors when the war began in March.

But Thielmann, one of four critics at a session held by the private Arms Control Association, said the Bush administration had formed a "faith-based" policy on Iraq and took the approach that "we know the answers; give us the intelligence to support those answers."

Thielmann said the administration had distorted intelligence to fit its policy purposes. He said Iraq had no active nuclear weapons program and that while CIA Director George Tenet told Congress Iraq had Scud missiles, the intelligence finding actually was that the missiles could not be accounted for.

Gregory V. Treverton, a senior analyst at Rand, a government-financed research group, challenged what he said was the administration's persistent description of intelligence as evidence when it often is a qualified judgment.

But the administration extracted from the data the "best bumper stickers" it could fashion, said the former vice chair of the National Intelligence Council.
Joseph Cirincione, a proliferation expert at the Carnegie Endowment for International Peace, credited U.N. inspectors with doing a good job of finding weapons in Iraq and having them dismantled.

But he said the administration in its statements made the inspectors "look like fools" and went far beyond U.S. intelligence findings on Iraq.