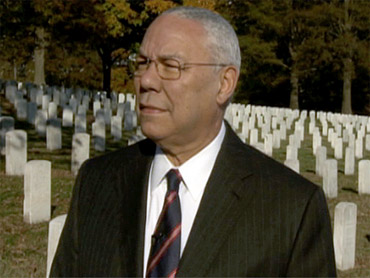 There are about 23 million people alive today who've served in the United States armed forces.

On this Veteran's Day, the eleventh day of the eleventh month, originally marking the end of WW I, Americans honor all the military men and women who have given so much for our country.

Walking among the tombstones at Arlington, Smith remarked, "You just realize how many veterans are dying every day."

"Yes," Powell replied. "We are seeing the WWII generation pass through, and then the Korean War generation, and even my generation, the Vietnam War generation, … But the one thing they all have in common is that everyone of these funerals and every tombstone that you see here represents an American who served his country. … When I walk through Arlington, what strikes me is that, when you look at these headstones and tombstones, you can't tell me what color they were, what part of the country they were from, were they rich were they poor. If you get close enough, you'll see the name, what service, they served in, and you'll see a religious symbol. … But when you step back and just look across and see them lined up the way they are - 300,000 of them, you see all the greatest generations of Americans. It wasn't just the WW II generation. They were great, but America has been blessed to have greatness in every single generation, to include our current generation of GIs serving in Iraq and Afghanistan. We should be so proud of them and never forget what they did and their families did."

"Yes. No," Powell responded. "We are asking a lot of them. I've heard of some of them going back six and seven times. We are asking more of them than, even, the World War II generation because, in some previous wars, you might have some periods of quiet and then the battle comes, but in these two wars,the battle is there almost every day. You never know where it's going to erupt -- it's going to be an IED (improvised explosive device), not necessarily somebody shooting at you. … And so, we are asking a lot of them, but what is so wonderful about this current generation is that they give us that great deal, they go back."

What should Veteran's Day really mean to Americans?

"I think that most American's realize what Veteran's Day is. Yes -- it's also a holiday and we go shopping and we do lots of other things, but there will be celebrations all across America. I've participated in several already this week, and so people still remember. Why do people go to the Vietnam Wall -- 4 million a year? Why do World War II veterans and their families come back here on weekends to visit the WW II Memorial? Why did it mean so much to your family and your father in law when he visited the Iwo Jima Memorial to reflect? So, I think the spirit is still there, but at the same time, let's hope that we don't have more wars, and let's hope a day may come when people will remember this and that there will be no new generations put into their graves as a result of war. Let's pray for that."

Harry Smith is beginning a webshow for CBSNews.com. Its first installment is the entire interview from which portions were taken for the above account. To see the whole interview, click on the video below: