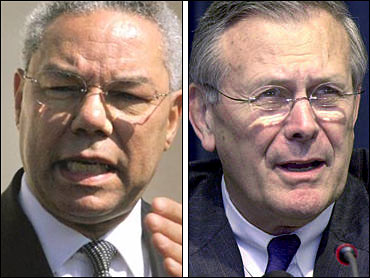 Against a backdrop of reported tensions, Secretary of State Colin Powell and Defense Secretary Donald H. Rumsfeld met over lunch Wednesday at the State Department.

The meeting, described by Pentagon officials as a routine, periodic get-together, was not announced and did not appear on Powell's public schedule issued daily by the State Department.

However, spokesman Richard Boucher said "it's one of their regular lunches they have every week or so." Boucher said Powell and Rumsfeld "have been talking virtually every day on the phone."

Rumsfeld has described his relationship with Powell as friendly and has denied any personal difficulties. Similarly, Powell has spoken positively of his dealings with Rumsfeld and has emphasized that U.S. foreign policy, as implemented by the State Department, is set by President Bush.

Still, reports of disagreement on a range of issues persist, with Rumsfeld usually portrayed as a hard-liner and Powell as a moderate.

In a letter to Sen. Richard G. Lugar, R-Ind., chairman of the Senate Foreign Relations Committee, the academy praised Powell for what it called "major, even historic" achievements in managing the State Department.

Rumsfeld generally has taken a tougher line than Powell on various foreign policy issues. For instance, he opposed going to the United Nations for authority to use force against Iraq and was believed to have opposed a formal treaty with Russia to codify planned reductions in long-range nuclear weapons.

Powell prevailed on both points.

Rumsfeld also was an early advocate of U.S. pursuit of terror groups, taking a public stand before the 9-11 attacks in New York and Washington.