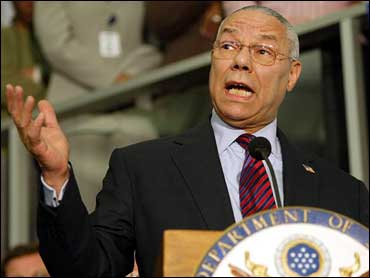 Former Secretary of State Colin Powell on Sunday supported government eavesdropping to prevent terrorism but said a major controversy over presidential powers could have been avoided by obtaining court warrants.

Powell said that when he was in the Cabinet, he was not told that President Bush authorized a warrantless National Security Agency surveillance operation after the Sept. 11, 2001 attacks.

Appearing on ABC's "This Week" Powell said he sees "absolutely nothing wrong with the president authorizing these kinds of actions" to protect the nation.

But he added, "My own judgment is that it didn't seem to me, anyway, that it would have been that hard to go get the warrants. And even in the case of an emergency, you go and do it."

The New York Times reported on its Internet site Friday that the NSA has traced and analyzed large volumes of telephone and Internet communications flowing into and out of the United States. The program bypassed the secret Foreign Intelligence Surveillance Court.

CBS News correspondent Jim Stewart (video)
reports that, in addition to questions about the legality of the program, another question certain to be asked by Congress is what the secret surveillance accomplished.

Powell said Congress will need to judge whether Mr. Bush is correct in his assertion that he could approve eavesdropping without first obtaining court orders.

"And that's going to be a great debate," Powell said.

"There are very conservative libertarian Republicans who agree with liberal Democrats that you have to pay attention to civil liberties and balance that with national security. That's very tough to do," Borger said on CBS News' Face The Nation Sunday.

Powell, who also is a former chairman of the military Joint Chiefs of Staff, had no reservations when asked whether eavesdropping should continue.

"Of course it should continue," he said. "And nobody is suggesting that the president shouldn't do this."