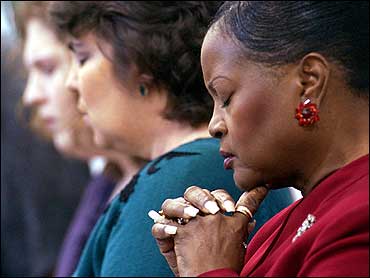 Americans gathered in their houses of worship Sunday to pray not only for the seven members of the space shuttle Columbia but also for the nation, grappling with yet another tragedy so soon after Sept. 11.

During a service at a church near the White House, President Bush bowed his head as a minister said, "God's heart is more heartbroken than our own."

The Reverend Luis Leon said the shuttle astronauts represented the explorer's spirit in every person. And he added, "Let us pray for that spirit to be kept alive in us."

He said he had heard some people offer the view that the breakup of the shuttle was "God's way of getting back at us" for Bush's policies toward Iraq.

Instead, he said, the fate of the shuttle was "the price we paid for exploration."

A guest minister later read the names of the shuttle crew members, and asked that church-goers pray for them.

"Incredible, unbelieveable,'' said the Rev. Steve Riggle of the loss. "That's the amazing thing, that in this congregation they're just normal people."

In Detroit, relatives of astronaut Michael Anderson turned to their church for comfort. At a service in Detroit, cousin Willie Mae Little said the family is in shock -- but proud of Anderson's accomplishments as one of only a handful of black astronauts.

Ministers who had planned to address the prospect of war with Iraq, the economy and other topics dominating public discussion instead spoke of the sacrifice the seven astronauts made to further science.

"There have always been those people who had the courage and the faith to move through frontiers. They do that at great risk sometimes, and we are the beneficiaries of their great spirit and bravery," said the Rev. Victor Nixon, of Pulaski Heights United Methodist Church in Little Rock, Ark.

A 9-year-old girl stood on her toes to light seven memorial candles on the altar of the First United Methodist Church of Titusville, Fla., where many Kennedy Space Center workers live.

The pastor, the Rev. David Waller, called the trail of smoke from the shattered spacecraft a "glistening tear across the face of the heavens."

Members of Temple Israel of Greater Miami recited the Mourner's Kaddish, or traditional prayer for the dead, for Israeli astronaut Ilan Roman and the six other crew members. The tragedy happened on the Sabbath, when Jews are prohibited from mourning, so many congregations held special services Sunday.

"It is like something has broken," said Karina Zilberman, who helped lead the Temple Israel service. "The purpose was for them to come back and share their experiences."

Rabbi Zvi Konikov of the Chabad Jewish Community Service Center in Satellite Beach, Fla., near the Space Center, said mourners brought a "trail of flowers" to his congregation in honor of the crew. He led a memorial service Sunday morning.

"Everyone was in tears," said Konikov, who spoke of befriending Ramon during the Jewish astronaut's training.

At St. Andrew's Episcopal Church in New Orleans, worshippers honored the crew with a variation of a military song called the "Navy hymn."

"Save all who dare the eagle's flight, and keep them by thy watchful care, from every peril in the air," churchgoers sang.

At the Roman Catholic Our Lady of the Angels Cathedral in downtown Los Angeles, seven candles burned beside the altar. Mass began with 70 seconds of silence and the church bells tolling seven times.

Parishioner David Moore said the tragedy made him think of other explorers such as Lewis and Clark who sacrificed for the cause of human advancement. "These astronauts were pioneers," he said.

The Rev. Mike Weaver of the All Saints Evangelical Lutheran Church in Columbus, Ohio, had planned a sermon called "Freedom from Fear," but instead talked about Saturday's disaster. He repeated the words President Reagan used to comfort the nation after the 1986 explosion of the space shuttle Challenger.

"They slipped the bonds of Earth to touch the face of God," Weaver said.

At St. Bartholomew's Church in New York City, the names of the crew members were recited during the customary prayers for departed loved ones.

"I woke up with them on my mind this morning," said Jane Betteken, a retired secretary and saleswoman, who attended Mass at Saint Justin Martyr Catholic Church in the St. Louis suburb of Sunset Hills.

"I took for granted that everything went so well for many years with those space programs," she said. "Then, all of a sudden, you're faced with reality."

In Woodland Hills, Calif., Rabbi Jeffrey Ronald of Kol Tikvah Temple said Ramon and the rest of the astronauts should be celebrated for their accomplishments, not mourned.

In Houston, the entrance to the Johnson Space Center has turned into a shrine for the seven fallen astronauts. Mourners have left flowers, burning candles, teddy bears, American flags and notes.

For Kalpana Chawla the first Indian-born woman in space, this note was left: "You came a long way. You will be remembered deeply and dearly by all."

Another sign for Ilan Ramon read, "You're our hero. We'll never forget you." Next to the sign was an Israeli flag and four blue and white balloons, the colors of the flag.

And a child wrote, "We'll miss you" to Rick Husband, the mission's commander. It was next to a framed American flag accentuated by pictures of all seven astronauts.

NASA figures prominently in Houston. One woman who came to pay her respects says everyone either works at NASA or probably knows someone who does.

"While billions of us struggled this week for life and meaning upon the land's surface, a handful of lucky explorers were privileged to enjoy that lofty perspective." Ronald said.

There was a standing-room-only crowd at the church at Bagram Air Base in Afghanistan. Soldiers read from the Bible and sang hymns after tucking their weapons under the seats. Flags at the base were at half-staff.

The base was already in mourning after the loss of four U.S. soldiers who died when their modified Black Hawk helicopter crashed Thursday during a nighttime training mission.

"The mood is pretty somber," said Gunnery Sgt. Daniel Duran, a Marine from Topeka, Kansas. "I don't know anybody personally that was in the Black Hawk, but it really hits home. We're out here and when a crash happens, it's for real. It's not an exercise. Then the shuttle happened."

A Roman Catholic service there included prayers for the space shuttle crew and those who died in the helicopter crash. The communion song was "On Eagles' Wings" and the closing hymn "I'll Fly Away."

When the Protestant congregation was asked to suggest prayers at the opening of its service, Maj. Tom Roltsch, from Alexandria, Va., asked that the dead helicopter and shuttle crews be mentioned alongside various prayers for safe trips home and ill relatives.

"There's been a lot of death this week, a lot of sadness," he said later. "And we really want to lift up those families in prayer for their grief and their loss. We might be here, but we're remembering them back home.

A few hours later, Maj. Marty Luckie, a Methodist minister, used the twin tragedies to remind more than 100 soldiers that "certainty is not a human attribute." The fallen space shuttle, he said, showed "the most immaculate application of our technology has fallen apart."