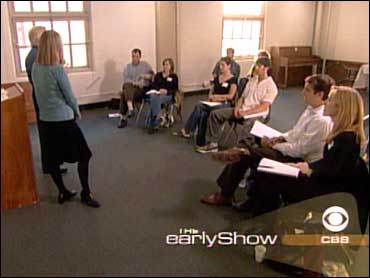 Children of divorce know more than anybody that love is not enough. So here's an ounce of divorce prevention: Tracy Smith takes a look at Marriage Prep 101.

There's actually a magic number – a ratio you should remember if you want to have a happy marriage. It's five to one; five positive interactions to every negative one; five fun, affectionate times for every knock down drag out brawl. That's one of the things couples learn in a little marriage education class that has become the cool wedding gift of the year.

Andree Merchant and Michael Christy are facing the first major challenge of their married lives: the wedding.

But according to research, these two have a better shot at a happy marriage because they are graduates of Marriage Prep 101.

Doctors Michelle and Patrick Gannon give weekend seminars based on 20 years of research and 12 years in the trenches.

"About half of the couples in our workshop, one of the partners comes from a family of divorce," his wife adds.

"As much as you think you've got a perfect relationship, there's no guarantees," says Michael Christy, who graduated from Marriage Prep 101.

He should know. His idyllic childhood was forever changed when one parent's infidelity led to divorce.

"People who come from divorce … are more motivated and know that love is not enough," Dr. Michelle Gannon explains.

"An eight-hour marriage education class taken before the wedding can reduce divorce by 50 percent five years later," says Diane Sollee, Director of smartmarriages.com. She is at the forefront of marital research

"Couples who stay happily married disagree just as much as the couples that get divorced," Sollee says. "It's about knowing how to do marriage."

The lessons are simple and skill-based. The first key: get a clue about what your partner expects from the marriage.

"My expectation is I would like to have children, preferably two or three," says Michael Christy. "And luckily, that's Andree's expectation also. So, it's…."

"Really?!!" Andree interjected. "No, that is very true. Although, you know, three is a lot. We'll start with one first."

Research tells us many couples are unprepared for that second or third year when excitement fades, real personalities emerge, and conflicts grow.

"We mislead people. We call it the honeymoon phase, and we should call that the clash of civilization phase," says Sollee.

"Andree is a list person. And she tends to hide the list from me," says Michael. "But, one day I got a hold of the list. And I noticed the notation that Andree had to sharpen the knives. And to me, sharpen the knives was not something that needed to be focused on."

Here's a surprise: conflict avoidance is a no-no. It's good to fight, but couples need the Geneva conventions.

"If a couple gets into a big fight and their heart rate goes above 100, they are not thinking clearly," Michelle Gannon explains. "When you get too hot, you take a time out," he husband adds.

The research has identified specific fighting behaviors that torpedo marriages.

"There are four main hostile behaviors that are predictive of divorce. They're criticism, defensiveness, contempt and stonewalling. And stonewalling often goes with the conflict avoider," Michelle Gannon says. "They just leave the room. Hang up the phone. Go away for a few days. And that is very dangerous for a relationship."

Set a time and place for potentially difficult discussions. Men in particular, who make up 80 percent of the stonewallers, need parameters.

"What time's it start? How long will it take? And, how do I signal for a timeout? They love it. They will even talk to their wife if they know those three things," Sollee says.

And then figure out what your partner loves and just do it.

"I like it when Andree tells me she loves we and as we're walking down the street and she holds my hand," Michael says,

"He's loving me all the way to the trash can when he takes the trash out, when he goes to the grocery store," Andree adds.

Bottom line: keep talking, a little communication goes a long way to making that walk into the sunset a little smoother.

Finally, there are some absolute don'ts: no eye rolling, do not threaten divorce when you're fighting, and ladies, be succinct.