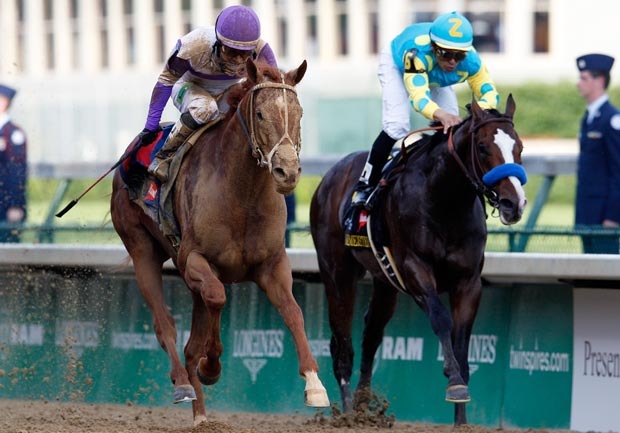 (AP) BALTIMORE - Doug O'Neill could have been insulted. The Preakness odds had just been announced and the Kentucky Derby winner was second favorite behind a horse he ran down and defeated two weeks earlier.

O'Neill smiled. He figured the handicapper at Pimilico Race Course was merely displaying reverence for Bodemeister trainer Bob Baffert rather than dissing Derby winner I'll Have Another.

"Bob Baffert has won five of these," O'Neill said Wednesday. "I've never run a horse here. I totally respect that. I just hope anyone who bets Bodemeister is regretting it Saturday night."

Baffert was asked whether being a five-time Preakness winner was an advantage.

"I've won it with the best horse. That's why I've won it," he replied. "That's the best advantage you can have."

And Bodemeister, who arrived at Pimlico on Wednesday, is in excellent shape.

"He looked great this week. He looks healthy," Baffert said. "He doesn't look like a horse that just ran a mile and a quarter."

Despite losing the Derby to hard-charging I'll Have Another, Bodemeister was installed as the 8-5 favorite in Saturday's second jewel of the Triple Crown.

I'll Have Another was a 5-2 pick on the morning line.

Baffert was delighted to receive the No. 7 post in the 11-horse field.

"With him, anything in the middle would be fine," the Hall of Fame trainer said. "With the Preakness, you just don't want to be stuck on the inside where you have to use your horse a little bit. The Derby winner drew really well, also."

I'll Have Another will start from the No. 9 post. The colt, who won the Derby out of the No. 19 post, will again be ridden by Mario Gutierrez.

"Anything with a nine in it, we feel very good about. We're cool with it," trainer Doug O'Neill said. "We talked about the possibility of being inside Bodemeister and really forcing our hand to push him early. Now it's in Mario's hands to still kind of push Bode, but we'll be on the outside of him."

The question is: Does Bodemeister have enough left to sprint to the finish in the 1 3/16-mile race?

"You can't run as fast and as hard as he did and not have it affect you," said Barry Irwin, managing partner of Went the Day Well, who finished fourth in the Derby and is a 6-1 shot in the Preakness.

A victory would give I'll Have Another the chance to become the first Triple Crown winner since Affirmed in 1978.

"I'm confident," O'Neill said. "You never know. But as long as we continue to train like our horse is training, we won't be that far off Bodemeister. If anything Bodemeister might be behind us early."

The odds were set by Pimlico Race Course handicapper Frank Carulli. The field is the smallest since 2007, when Curlin beat Derby winner Street Sense in a nine-horse field.

Creative Cause trainer Mike Harrington, whose horse finished fifth in the Derby, was delighted with the No. 6 post.

"I don't think it affects our running style," Harrington said. "With 11 in there, post position is not nearly as important as the Derby. The middle is great. You couldn't ask for anything better."

Hall of Fame trainer D. Wayne Lukas has a long shot with Optimizer, but spoke optimistically after getting the No. 10 post.

"I love it. I love the horses inside of me," Lukas said. "I love the whole thing. If they gave me a pick, I would have picked that one. It turned out great. Every time they drew another one, it looked better."