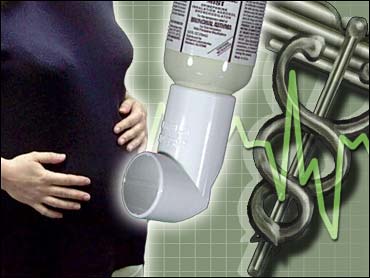 Physicians should pay close attention to managing asthma in pregnant patients, according to guidelines being released by the National Asthma Education and Prevention Program.

Asthma can lead to serious medical problems, both for mothers-to-be and their fetuses, the program — part of the government's National Heart, Lung and Blood Institute, warned.

"Simply put, when a pregnant patient has trouble breathing, her fetus also has trouble getting the oxygen it needs," Dr. William W. Busse, professor of medicine at the University of Wisconsin Medical School and chairman of the panel that developed the guidelines, said in a statement.

Dr. Barbara Alving, the institute's acting director, said "the guidelines review the evidence on asthma medications used by pregnant patients. The evidence is reassuring, and suggests that it is safer to take medications than to have asthma exacerbations."

The Early Show's Dr. Mallika Marshall explains that there haven't been any formal updates to guidelines for the treatment of asthma in pregnant women since 1992, but new asthma medications have come out since then, along with many studies and reports.

What they're doing with these guidelines, she says, is addressing the newer medicines and putting all the updated information in one place for doctors and their patients, to assure that everyone is on the same page.

According to the new guidelines, pregnant women need to have their asthma monitored monthly, at the very least. Some patients might need to be seen more often.

Marshall says doctors should assess a new patient's situation: Has she had asthma all her life, or was this a more recent diagnosis; how often is her asthma aggravated; does she need a fast-acting inhaler only occasionally, or is her case severe enough that she needs to take medication regularly to prevent attacks, and so on. If a woman has a particularly severe case of asthma, her doctor might want to see her twice a month, or even every week. Asthma manifests itself differently for everyone, and that certainly includes pregnant women.

It's definitely a good idea, Marshall adds, to educate pregnant patients to recognize that they are breathing for two. They'll want her obstetricians to have open dialogues with the doctors they see for their asthma

For about 30 percent of women with mild asthma when they get pregnant, the illness worsens during pregnancy, according to a recent study by the National Institute of Child Health and Human Development. On the other hand, the study also found that asthma improved in 23 percent of the women who initially had moderate or severe asthma.

The guidelines, which are being published this week in the Journal of Allergy and Clinical Immunology, urge limiting exposure to asthma triggers and treating conditions that can worsen the respiratory ailment, such as allergic rhinitis, sinusitis and gastroesophageal reflux.

"As important as medications are for controlling asthma, a pregnant woman can reduce how much medication is needed by identifying and avoiding the factors that make her asthma worse, such as tobacco smoke or allergens like dust mites," Dr. Michael Schatz, chief of the Department of Allergy at Kaiser Permanente San Diego Medical Center, said in a statement.

Among the guidelines' recommendations:

-Albuterol, a short-acting inhaled drug, can be used as a quick-relief medication to treat asthma symptoms. Pregnant women with asthma should have this medication available at all times.

-For women with persistent asthma, inhaled corticosteroids are the preferred medication to control the underlying inflammation.

-For women whose persistent asthma is not well controlled on low doses of inhaled corticosteroids alone, the guidelines recommend either increasing the dose or adding another medication — a long-acting beta agonist.

-Oral corticosteroids may be required for the treatment of severe asthma. The guidelines note there are conflicting data regarding the safety of oral corticosteroids during pregnancy, but add that severe, uncontrolled asthma poses a definite risk to the mother and fetus.