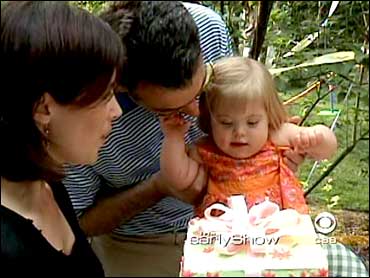 Advances in prenatal testing mean doctors can now spot more problems, earlier in pregnancies. But is that knowledge always a good thing?

The Early Show national correspondent Tracy Smith reports that, while knowing of potential abnormalities can be helpful, it can also present couples with very hard choices.

In part two of the series, "Not Your Mother's Mother," Smith met a couple faced with such a decision, and got a pointed take from a specialist on the wisdom of awareness.

Wendy and Andrew Lacey were married in 1995 and settled into a picture-postcard, Victorian house in suburban Montclair, N.J., Smith says.

Their first child, Paige, was born in 2002, normal and healthy.

Before long, another child was on the way. But this time, things were different: Tests that didn't exist just a few years ago showed a significant chance the baby would be born with Down syndrome, a genetic disorder characterized by physical abnormalities and mild to moderate mental retardation.

Doctors can now predict the likelihood of Down syndrome almost before a pregnant woman begins to show, Smith pointed out, and that knowledge is forcing some difficult decisions. While there are no hard and fast numbers, it's estimated that up to 80 percent of couples who find out their baby has or is likely to have Down syndrome terminate the pregnancy.

Wendy's obstetrician-gynecologist, Dr. Judith Wenger, told Smith: "I have not delivered a genetically abnormal child, but I've seen it happen, and it's devastating. It's the happiest day of your life and it's the most wonderful thing in the world and then, all of a sudden, someone tells you something's wrong."

Wenger said she "absolutely" asked Wendy if she wanted to terminate the pregnancy.

But Wendy reflected, "I think what happens too often now is people have a knee-jerk reaction: 'Oh, I'm not gonna have the perfect child. Let's end this pregnancy.'

"We had a decent experience with the medical profession, but we know families, firsthand, who were told, 'Your baby has Down syndrome, you shouldn't have this child, it will ruin your life.' "

The Laceys say they respect the right to make that choice. But for them, it wasn't an option: Possible Down syndrome or not, Wendy was going to keep her baby.

"As a mother," Wendy said, "it didn't matter if she was healthy; I was gonna love her, no matter what."

Evelyn Wilkes Lacey was born on June 29, 2004. The early tests were correct: She had Down syndrome, and a serious heart defect that required surgery to repair.

But the Laceys couldn't have been happier.

"We felt," Wendy says, "like we knew so much about this baby before she arrived, but to actually have her in our arms was so — such a joyful, joyful occasion."

Now, with her little heart fixed, Evelyn isn't much different than any other 2-year-old, curious and lovable, Smith observes.

And, since Evelyn's birth, the Lacey family has grown again: Derrick was born this year, normal in every way.

Wendy admits she and Andrew "had concerns" about having a baby after Evelyn but, because the Laceys had time to get ready for a special needs child, Evelyn's birth was not an unpleasant shock, but a cause for celebration, they say.

Asked by Smith if she thinks Wendy and Andrew were better off knowing about what might be wrong with the child Wendy was carrying, Dr. Wenger answered, "Yes, absolutely."

"We're better off than our moms were?" Smith asks.

To Wendy, Smith says, that knowledge was an absolute gift. And so is Evelyn.

"A lot of doctors say, 'Oh, what a tragedy; this is terrible; I'm sorry for you,' " Wendy says. "Don't say that. Congratulate people when you hear about their baby, because it's their baby, and they love that baby."

So, what would Wendy say to doctors cautioning that such a child could ruin your life?

"Look at Evelyn and look at our life. We have a different story to tell."

Smith added that the Laceys haven't ruled out having even more children.

For much more on Down syndrome, visit the Web site of the National Down Syndrome Society by clicking here.