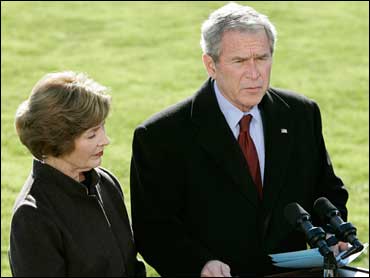 President George W. Bush and first lady Laura Bush have bought a home in an affluent North Dallas neighborhood, where they will live after the president leaves office in January.

Laura Bush's press secretary, Sally McDonough, said Thursday that the Bushes purchased a home in the Preston Hollow area, where some of the state's wealthiest residents live in some of its most expensive houses.

"We picked out a house but we don't have occupancy of it so as soon as we do, we'll announce exactly where it is," Mrs. Bush told NBC News on Thursday. "We're looking forward to that."

While the White House has declined to disclose the address, local property records indicate that Robert McCleskey, a Bush family friend from Midland, Texas, who has done accounting work for the family, recently bought an 8,500-square-foot house with a market value of $2.1 million on a cul-de-sac with about a half-dozen homes.

McCleskey is listed as a trustee on the ranch-style brick house on Daria Place, and he said the house was bought Oct. 1. He said he could not say for whom the home was purchased.

The president is buying his post-White House home at a time of falling real estate prices and lowered mortgage interest rates.

A constant parade of reporters, TV news trucks and curious onlookers drove past the home on Thursday on the news. A gate at the top of the driveway affords some privacy to the four-bedroom house, which was built in 1959 and has a wide front yard and dark shutters The home also has four and a half bathrooms, a wet bar and a fireplace.

The records indicate the gable-roofed home is in very good condition. The total estimated taxes on the property are listed at $43,984.

A woman identifying herself as the home's owner confronted photographers and asked them to stop taking pictures of the house. She refused to identify herself.

Dallas County records show that the house was previously owned by Daniel Boeckman, a Dallas investor, and his wife, Laura. Daniel Boeckman did not immediately return a phone call Thursday.

Christine Tomasides, a mother of two and corporate contract writer who lives a half-block from the home, said she knew something was up about a month ago when black SUVs began rolling into the neighborhood. Secret Service agents often use such vehicles.

She described the neighborhood as peaceful, quiet and a place where people stay out of each other's business. She said she'd never seen as much traffic as there was on the street Thursday. Tomasides welcomed her new neighbors — and the heightened security they'll bring.

"Laura Bush seems like such a fine person, and I can't imagine anyone not wanting her as a neighbor," Tomasides said. "And him, too, regardless of your political affiliation."

Another of Bush's possible nearby neighbors is Allan Bell, 63, a retired accountant who's lived up the street for 22 years.

"I like the guy. I think he did a good job," Bell said. "This should be interesting once all the hoorah dies down."

The Bushes previously lived in Dallas from December 1988 through January 1995, before moving to the Texas governor's mansion in Austin, Texas. The Bushes will continue to spend some time at their ranch in Crawford, Texas, McDonough said.