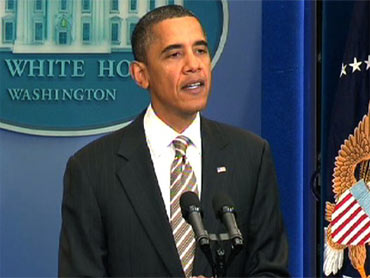 In what's seen as something of a surprise, it appears likely President Obama won't be on the guest list when Prince William marries Kate Middleton in April, according to CBS News contributor Neil Sean.

He says, "The story I'm getting already from insiders (in Buckingham Palace) is that we don't actually anticipate the president to attend the wedding. But we do think, for that extra touch of glamour, the gorgeous Michelle Obama will be making an appearance. Quite who she brings remains to be seen. … I think what's interesting is that they don't really think that the president may want to attend, because of all the extra security: helicopters flying above, things like that. That may be a little bit more intrusive (than the Royal Family wants), I think."

It also seems likely the royal couple may, as CBS News Correspondent Mark Phillips put it from London, "be trying to stage a kind of public lottery, a golden ticket … to popularize the wedding and allow some of the 'normal' people inside the ceremony."

But Sean cautioned "Early Show" co-anchor Maggie Rodriguez, "Don't think for one minute it that this is just gonna be a ticket that you can collect and, of course, you wouldn't be unsupervised. These people will be checked, vetted. Of course, you can't have a reality star or maybe even Donald Trump just turning up. It has to be the right sort of people. So, it's a nice gesture, and it means a lot, obviously. But the bottom line is, it will be well-crafted, like many things within a royal wedding."

One British newspaper, The Sun, is ballyhooing what it calls an exclusive - that Prince Harry will be best man. But Sean wasn't impressed, saying, "(Prince William is) best friends with Prince Harry, his brother. Who on earth would you pick? So what sort of exclusive is that the paper is claiming? Of course it's going to be Prince Harry. Why wouldn't it be?"

What will be more interesting, Sean observed, is Harry's choice for a date. He recently broke up with longtime girlfriend Chelsy Davy so, says Sean, "All eyes will be on whoever he takes. And of course, the poor girl's gonna be sort of under scrutiny: What is she wearing, you know, all that sort of thing. So, she'll have to be slightly subdued, as we can't have the bride upstaged, can we?"

Sean also threw cold water on numerous reports that Middleton's parents will contribute a significant chunk of money toward the wedding's costs, saying, "The Middletons are wealthy, you know, in normal terms, reasonably wealthy. They're not wealthy to participate in paying for any elements of, of course, a royal wedding. Most of the money, in fact, all of the money will come from the Queen's private purse, along with (that of William's father) Prince Charles. So, I think that's a nice gesture that they've sort of said, oh, well, they will dip in but, apart from maybe the sort of plastic bride and groom on top of the cake, I can't think they could afford much. They're a nice couple, trust me, but they can't afford that much."

Speaking of money-related matters, one British newspaper estimates the wedding will cost about $8 billion in lost economic production, since the "wedding day will be a nationwide party -- another holiday in April, when there are already two other major holidays here."

Only 40% of Black respondents say they could last more than six months.