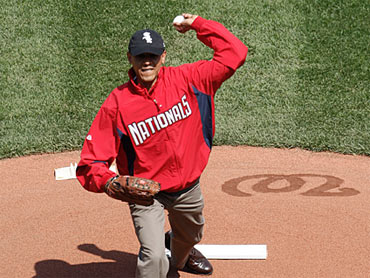 Ben Rhodes, deputy national security adviser for strategic communications and speechwriting, tweeted the announcement Tuesday after Major League Baseball and the players' association announced arrangements had been finalized for the game against the Cuban National Team in Havana.

The White House announced the president's brief visit to Cuba last month. It will mark a watershed moment in relations between the U.S. and Cuba, making Mr. Obama the first sitting U.S. president to set foot on the island in nearly seven decades.

While in the country, President Obama plans to meet with groups advocating for change in Cuba, a condition the president had laid out publicly for such a trip. He will meet with President Raul Castro -- but not his older brother Fidel, who has been a longtime adversary of the United States for decades.

"It adds a great dimension to the trip, and it's going to shine an even greater spotlight on the events and on Major League Baseball," Rays President of Baseball Operations Matt Silverman said.

It will be MLB's first trip to the communist island nation since the Baltimore Orioles played there in 1999. The game will be televised by ESPN and ESPN Deportes.

"During a time of historic change, we appreciate the constructive role afforded by our shared passion for the game, and we look forward to experiencing Cuba's storied baseball tradition and the passion of its many loyal fans," baseball Commissioner Rob Manfred said in a statement.

Manfred drew the Rays on Nov. 13 from a bin of teams that wanted to make the trip. U.S. teams played spring training games in Cuba before Fidel Castro's revolution, but none appeared there from March 1959 until the Orioles faced Cuba's national team in Havana in March 1999.

"We're extremely excited as a group to be a part of this process," Rays pitcher Chris Archer said. "In a sense, we're part of something that's extremely historic for both countries, and looking to mingle and experience the culture of a place where we haven't been able to travel freely for a while."

Hundreds of workers on Tuesday were at the Latin America Stadium, built in 1946 and said to have a seating capacity of 55,000. They are fixing the roof, repairing damaged seating areas and grooming the field surface.

Workers with jackhammers broke up damaged pavement outside, and painters brightened the stadium exterior.

"We're excited to be part of this trip. For us, it's about spreading goodwill through baseball," Silverman said on a conference call. "We're excited for the opportunity and to experience firsthand the baseball culture of Cuba.

"Logistically, there will be some challenges. But the players' association and Major League Baseball worked hard to minimize the disruptions. Our first priority is getting ready for opening day. And we worked hard to make sure that this trip won't interfere much, if at all, with those preparations," he added.

Fewer than 40 players will make the trip, but the Rays were yet to have in-depth discussions about the composition of the roster, Silverman said.

"We've been working with Major League Baseball and the State Department to figure out the visas and the exact size. It hasn't been finalized yet," he said. "It'll be a traditional traveling baseball party, and then a number of our front office will also be attending. There will be a few special guests. But the contingent won't be that large. It can't be larger than the two planes we're going to take down there."