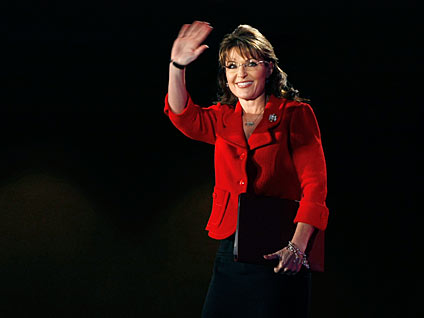 Sarah Palin does things her way, whether it's finding new ways to talk to her supporters or new words to use when talking to them. She has had two notable achievements recently. First, her neologism "refudiate" was chosen by the editors New Oxford American Dictionary's Word of the Year for 2010 and added to its official lexicon. Second, she ventured from her comfortable Facebook home to cooperate with a profile in the New York Times. She comes across well--just in time for the launch of her book America By Heart.

Palin seems to recognize that if she wants to continue her rise, she is going to have to intersect with institutions like the "traditional media" and their "elite opinion-makers" on occasion. In the Times profile, Palin says she is seriously considering a run for the presidency and recognizes that this will require her to expand her tight circle. That will also mean intersecting with the "traditional" political and media system more often, and more regularly, no matter how much she wants to circumvent it. How closely she follows its rules is, of course, up to her. But here are three rules that she will have to contend with if she wants to become president:

Voters should like you. Palin is very well-liked among conservatives, but in the broader public, she is not well-liked. This condition is not improving with familiarity. Fifty-two percent of those polled have an unfavorable opinion of her, according to a recent Gallup poll. That was her highest negative result ever in that poll. In a recent ABC/Washington Post poll, her unfavorable rating was 54 percent. She is particularly unpopular with independents and moderates, the kinds of voters who determine elections in swing states needed to win elections.

So there's hope. For Palin to succeed, she has to benefit as Clinton did. The incumbent has to be very unpopular (George H.W. Bush's unfavorable number in 1992 was 59), and the challenger has to improve her favorability rating. The first half of this equation seems at least plausible, especially if the economy continues to flag, which could further erode President Obama's popularity (his current unfavorable rating is 44). It's the second half that presents difficulties. Part of Palin's success among her core followers is that she doesn't back down. She takes on her opponents and picks fights--with old-boy Republicans like Rove, a Wall Street Journal reporter, and questions the president's manhood. But in that time period, the more people have been exposed to her, the more they dislike her.

Palin's new book comes out on a dubious anniversary. A year ago, when she published her last book, was the last time a poll showed that more people viewed her favorably than unfavorably. Since then, the gap has widened. The average of her unfavorable ratings has increased six points to 51.1 percent.

Palin's unfavorable rating could be meaningless when she's put head-to-head against potential challengers. This is what made Hillary Clinton seem plausible in 2008. While Clinton's unfavorable number was high, she still outperformed potential GOP general election challengers. Palin fans cannot take the same comfort yet. In a recent Quinnipiac University poll of potential GOP candidates, Palin tied in a hypothetical primary with Mitt Romney and Mike Huckabee, but in the hypothetical general-election matchups between president Obama and potential GOP candidates, Obama scores his highest against Palin with 48 percent of the vote to her 40 percent.

Huckabee: Palin "May Run Away with It" in 2012
Palin: I could beat Obama in 2012
Politics Lurk Beneath the Surface in Palin's TLC Show

Voters should think you're qualified. In the recent ABC/Washington Post poll, 67 percent of voters said Palin was unqualified to be president. This means that it's not just Democrats (82 percent) and independents (70 percent) who don't think she's ready for the job. Only 47 percent of Republicans think she's qualified, though more than 70 percent have a favorable view of her.

This problem is harder to dismiss as a left-wing media plot, because some of her critics are conservatives. Columnist Mona Charen recently argued that Palin shouldn't run, saying she lacked the qualifications. Barbara Bush quipped that she hoped Palin would stay in Alaska. (Her son is reported to hold a similar view.) Others who have questioned Palin's competence--from Karl Rove to Sen. Lisa Murkowski--have personal spats that may color their view, but to the undecided voter, this is opposition to her core qualifications that Palin must explain.

Palin no longer holds office, which is one way for candidates to show their qualifications, so she will have to make the case that proof can be found in her record. In the Times profile, she complained that the media bias made it hard for her to get across her past achievements. That's no doubt part of it, but Palin has also made the job of explaining herself harder by leaving office before her term was over. If she runs for president, she will be asking to lead the country. Quitting isn't a characteristic associated with the quality of great leaders--whether it's George Washington on Christmas Night, George Gipp of Notre Dame, or Winston Churchill during the Battle of France. The word quit isn't in leaders' vocabularies, goes the old clichÃ©. It will be another triumph of wordsmithing if Palin can not only explain why her achievements make her qualified but also explain why quitting doesn't disqualify her.

You've got to put in the time. The best way for Palin to beat the quitter rap is to show voters how hard she works. In one sense, this shouldn't be that difficult. If she is a mama grizzly, she never hibernates. She's everywhere, posting on Facebook, appearing on TLC, giving speeches and commenting on Fox News. The Times profile makes this point several times, referring to her 20-hour days, 3 a.m. e-mail messages and recounting stories of her prodigious study habits. If Palin appears this engaged as a candidate, she will be able to point to her campaign as proof of her qualifications, much as Obama did (though she'll want to deny that association, of course).

But campaigns require a different kind of hard work than the stunning brand-maintenance that Palin has been engaged in since the last election. Campaigns are not fun a lot of the time. They require candidates to do lots of things they don't want to--going to small events in out-of-the-way places, coddling local politicians, sucking up to members of the local media. Campaigns also require candidates to trust people they may not know very well because they have expertise in a state. Or not trusting people who love you but who may know nothing about Iowa. Palin will have to rewire her organization--and her personal instincts--to find this balance.

Can she avoid doing a lot of these dull things? Fred Thompson tried running a different kind of campaign. He failed. So did Rudy Giuliani, with the same result. Palin is more powerful and talented than Fred Thompson. But even Hillary Clinton was stung in the Iowa primaries when she didn't court voters the way they've become accustomed to being courted. Because Palin is such a superstar, and because she left office before her term was over, she's vulnerable to the rap that she's "taking the voters for granted." This may be an overrated vulnerability in general or a local myth pushed by local party bosses in early primary states like New Hampshire. Still, you can bet Palin's GOP opponents will be working to push this storyline regularly.

Palin has told Fox News that her husband Todd is leaning toward a White House run. This is the latest in her book tour as presidential striptease, a form which, unlike her many other innovations, she cannot claim to have invented. President Obama did the same thing. That's part of the trick: knowing which stuff to adopt and which to refudiate.

After Afghanistan, NATO must return its focus to Europe
Are Republicans serious about refusing to raise the debt ceiling?
Groping in the Dark