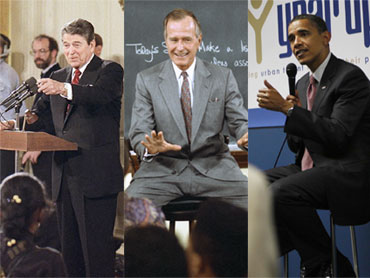 Conservative pundits have been raising objections over President Barack Obama's planned speech to the nation's students on Tuesday in which he will encourage children to stay and excel in school.

Critics believe the president will use that speech to promote his political agenda, rather than simply inspire them to excel in class, and some school officials have said they will not let students watch it.

Some parents have even said they would keep their kids out of school that day.

Florida Republican Party chair Jim Greer went so far as to accuse the president of trying to "indoctrinate America's children to his socialist agenda," and right-wing commentator Michelle Malkin accused the left of using kids in public schools as "guinea pigs and as junior lobbyists for their social liberal agenda."

What did Presidents Reagan and Bush say? That America was created by and for religious people, convicts would celebrate gun bans, and the media doesn't tell you the whole story about an adminstration's successes.

A Scary Story About Burglars

On November 14, 1988, the beginning of American Education Week, President Reagan gave a speech from the White House and answered questions from junior high school students from the Washington, D.C. area, in an appearance that was distributed to schools via an educational television network and also broadcast on C-Span.

In the transcript from the Reagan Presidential Library, Reagan talked about the previous week's election, democratic government and the Constitution, and America's leadership role in the world - in representative government, technology, the economy and culture. "Today from Asia to Africa to Latin America and behind the Iron Curtain, the world is in the midst of a democratic revolution that was foretold by the creation of the United States," he said.

"So, for America to gain greatest benefit from all the exciting new technologies that lie ahead, we will also need to reaffirm our traditional moral values, because these values are the foundation on which everything we do is built. So, yes, I would encourage you to study the math and science that are at the basis of the new technologies. But in a world of change you also need to pay attention to the moral and spiritual values that will stay with you, unchanged, throughout a long lifetime.

"And, again, I would say that the most important thing you can do is to ground yourself in the ideas and values of the American Revolution. And that is a vision that goes beyond economics and politics. It's also a moral vision, grounded in the reverence and faith of those who believed that with God's help they could create a free and democratic nation. They designed a system of limited government that, in John Adams' words, was suited only to a religious people such as ours. Our Founding Fathers were the descendents of the Pilgrims -- men and women who came to America seeking freedom of worship -- who prospered here and offered a prayer of thanksgiving, something we've continued to do each year, and so that we'll do it again on Thursday of next week.

"By renewing our commitment to the original values of the American Revolution and to the principles of 'We the People,' we can best preserve our liberty and expand the progress of freedom in the world, which is the purpose for which America was founded."

Afterwards, Reagan answered questions from the students, which touched on hot-button political issues as well as the Reagan administration's record:

Q. Do you feel that in your two terms as President that you and your administration have carried out the ideas of the Founding Fathers?

Reagan: Have we carried out the plan set by the Founding Fathers? I think we have subscribed to that. When we came into office, there were some things that we thought were very wrong, including the fact that there were more people unemployed, inflation was robbing the people of their earnings and their money, interest rates were high and all. And in these last several years, we have not only restored prosperity, but we have created almost 18-1/2 million new jobs, added to those jobs that were already there so that unemployment is so far down that today of all the Americans, 16 years of age and up, to whatever age, that pool of people -- 62.7 percent of those people have jobs, are employed today. But also, more important than that, I think we have restored the belief in America's freedom and the obligation that we have to our country. I think there's more patriotism today. We've been in a time when people have gotten rather cynical about those things.

When asked what the most important goal of Reagan's that he didn't get to accomplish, he advocated for the line-item veto, to take care of "hidden things" that Congress has inserted into bills, and a Constitutional amendment to balance the budget.

He told one student that the federal debt would not be "that big a problem" for the younger generation when the bills becomes payable, and told another that reducing the level of taxes (which he said "can be such a penalty on people that there's no incentive for them to prosper and earn more") increased government revenue.

He reminded a student asking about support for education that it was a state, not federal matter, but promoted his administration's anti-discrimination record, including a government bailout of a black private university facing bankruptcy.

When asked by one student about a new gun ban, Reagan promoted the waiting period for gun sales, saying "Well, I think there has to be some control. But I thought that in California we had a system that probably was the best. I have never felt that we should, for the law-abiding citizens, take the gun away from them and make it impossible to have one. I think the wrong people will always find a way to get one. But what we had was, even if today when I go back to California, if I want a gun and go in a store to buy a gun, I have to give them the money, but I have to wait a week, no matter who I am. I have to wait a week and come back then to get the gun, because in that week, my name is presented to investigative element there in the State that checks to make sure that I have no criminal record, that I have no record of mental problems or anything of the kind. Then, and only then, can you pick up the gun and take it with you."

He then told the children a story to illustrate his opposition to a gun ban: "I got the strangest letter when I was Governor. There was talk about having a gun ban in California. It didn't go through. But I got a letter from a man in San Quentin prison, and from the prison he wrote me the letter to tell me he was in there for burglary. He was a burglar. And he said, 'I just want you to know that if that law goes through, here in San Quentin there will be celebrating throughout the day and night by all the burglars who are in prison because.' He said, 'We can watch a house we plan to rob for days. We can learn the habits of the people living in that house, to know when is the best time to go in and be a burglar, rob it.' He said, 'The only question we can never answer is: Does the man in that house have a gun in the drawer by his bed?'' He said, 'That's a risk we have to run.'

"He said, 'If you tell us in advance they won't have a gun in that drawer by their bed ... the burglars in here will be celebrating forevermore.' I thought he made kind of some common sense."

"What We Don't Hear Enough About Are the Success Stories"

Democrats attacked President George H. W. Bush for his speech to students at Alice Deal Junior High School in Washington October 1, 1991, an appearance that was broadcast live on radio, CNN and PBS, and funded by the Education Department.

In his appearance (a transcript is available on the Bush Presidential Library's Web site), President Bush promoted his education plan, on the very day USA Today reported on the state of education in America.

"Every day, we hear more bad news about our schools," Mr. Bush said in front of the class. "Maybe you saw today's headline, I don't know if you had a chance to look at it, about the release of the new National Goals Report." Holding the newspaper up for the cameras, he said, "In math, for instance, this national report card shows that, nationwide, five of six eighth graders don't know the math they need to move up to the ninth grade.

"In spite of troubling statistics like this one, I don't see this report, however, as just bad news, and I'll tell you why. This report tells us a lot about what you know and what you don't know. It gives us something to build on."

"But what we don't hear enough about are the success stories," Mr. Bush continued, highlighting teachers and students who had excelled, before discussing his administration's efforts through the setting of "National Education Goals" in such areas as graduation rates, math and science scores, testing and literacy, and creating drug-free schools.

"Reaching those goals is the aim of a strategy that we call America 2000, a crusade for excellence in American education, school by school, community by community," he said.

"But what does all this mean, you might say, what is he doing, what does this all mean for the students right here in this room? Fast-forward -- 5 years from now. Unless things change, between now and 1996, as many as one in four of today's eighth graders will not graduate with their class. In some cities, the dropout rate is twice that high or higher. Imagine: Out of a total of nearly 3 million of your fellow classmates nationwide, an army of more than half a million dropouts. . . .

"Think about that tonight when you're at a kitchen table doing some homework; while your parents are meeting your teachers like so many millions do this year at back-to-school nights all across our great country. I'm asking you to put two and two together: Make the connection between the homework you do tonight, the test you take tomorrow, and where you'll be 5, 15, even 50 years from now."

He concluded his appearance with "a simple message," and encouraged the children to participate in government:

"Every time you walk through that classroom door, make it your mission to get a good education. Don't do it just because your parents, or even the President, tells you. Do it for yourselves. Do it for your future. And while you're at it, help a little brother or sister to learn, or maybe even Mom or Dad. Let me know how you're doing. Write me a letter -- and I'm serious about this one -- write me a letter about ways you can help us achieve our goals. I think you know the address."

Prior to the appearance, Education Secretary Lamar Alexander sent letters to every elementary and secondary school in the country -- 110,000 -- urging them to allow students to watch the President's speech.

"The Department of Education should not be producing paid political advertising for the president, it should be helping us to produce smarter students," the New York Times quoted House Majority Leader Richard A. Gephardt (D-Mo.). "And the president should be doing more about education than saying, 'Lights, camera, action.'"

The Times said White House spokesman Marlin Fitzwater responded to comments that Mr. Bush's talk to the schoolchildren was a political event by calling the criticism "nonsense."