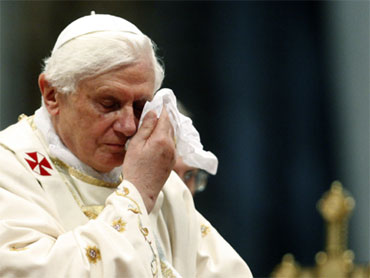 Germany's most prominent Roman Catholic youth organization says it is hoping for Pope Benedict XVI to speak out on the church's sexual abuse scandal in his home country.

The group BDKJ's head Dirk Taenzler told The Associated Press Monday he is hoping for guidance because everyone in the Catholic Church is appalled and worried about the recent surge of sex abuse cases in German church institutions.

Meanwhile, a top Vatican official says Pope Benedict will speak with a "clear and decisive voice" when he addresses clerical sex abuses in Ireland in a forthcoming letter.

Benedict is expected to release his letter soon in response to decades of systematic abuse in church-run schools and other institutions in predominantly Roman Catholic Ireland.

The abuse scandal has since spread to other European countries, most significantly Germany, the pope's homeland.

Archbishop Rino Fisichella told an Italian newspaper that the zero-tolerance policy that Benedict wants to implement is a "moral obligation."

Fisichella was quoted as saying Monday that measures introduced in the U.S. church, similarly rocked by an abuse scandal years ago, are making a difference.