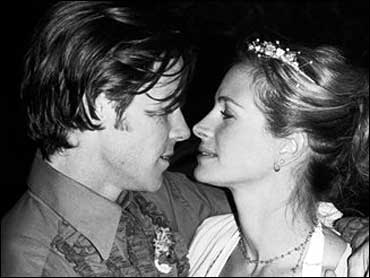 Julia Roberts delivered her greatest performance over the weekend. The Oscar winner gave birth to twins, a boy named Phinnaeus and a girl named Hazel. Roberts delivered the babies by Caesarean section after several weeks of bed rest.

On The Early Show Monday, entertainment contributor Jess Cagle, who is also a senior editor for People magazine, reported on the happy event to co-anchor Julie Chen.

"She is rested and happy and hoping to go home in the next few days," says Cagle. "She gave birth very early on Sunday morning, and she had been on bed rest since late October."

Roberts, 37, has two movies coming out over the holiday season: "Ocean's Twelve" (opening Dec. 10) and "Closer" (Dec. 3). She was still helping to promote them.

Reports Cagle, "I think that last Monday or Tuesday, after doing some phone interviews from her hospital bed, she was actually able to go home for the rest of the pregnancy. And then the little twins were just ready to come out, so she went back to the hospital over the weekend."

Cagle says he thinks "Closer" features one of the great performances of Roberts' career. "Could be another Oscar nomination," he notes. (She won the Oscar in 2001 for her performance in "Erin Brockovich.")

As for the names of her children, Cagle says, "They both have very old-fashioned names. Phinnaeus Walter Moder is the boy. Walter is the name of Julia Roberts' father. (He died of cancer when Julia was 10.)

"The girl, Hazel Patricia, is named after Patty Moder, who is Danny Moder's mom."

The father, Danny Moder, is a cameraman. He and Roberts met while they were working on the movie, "The Mexican."

"I think this couple is also going to be very, very protective of these kids and keeping them out of the spotlight."

Speaking of red carpet, Chen wanted to know, how soon does Cagle think we'll see Roberts back at work?

"If she gets an Oscar nomination," predicts Cagle, "then she may be out and about at the end of February. However, she has these two big movies coming out this month, and then she is going to take time off. She will not have a movie coming out for a while. Unless she has to show up to do some Oscar stuff, it's going to be a while before we see her. She's going to take some time off and be a full-time mom."

Roberts was already pregnant when she was shooting "Ocean's Twelve." But Cagle and Chen both report that pregnancy plays into the plot of that movie, although they could not reveal much more than that without spoiling a surprise. But Cagle did say that Roberts "actually had to wear a pregnancy belly while she was shooting 'Ocean's Twelve,' because she wasn't showing yet."

As for the next hot Hollywood mom, says Cagle: "Everybody is waiting for Jennifer Aniston. I would say that we have to call once a week because we hear a rumor that she's having a baby."