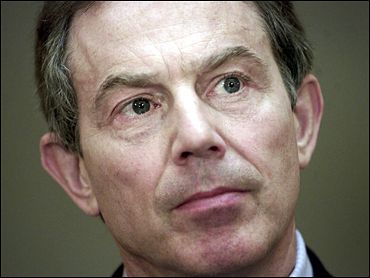 It also found that "in the absence of reliable evidence that intelligence personnel have either complained about or sought to distance themselves from the content of the dossier, allegations of politically inspired meddling cannot credibly be established."

The House of Commons Foreign Affairs Committee said the dossier, published in September, gave undue prominence to a claim that Iraq could deploy chemical or biological weapons within 45 minutes of Saddam Hussein's giving the order.

It said the language used in the dossier was "more assertive than that traditionally used in intelligence documents," and that the "jury is still out" on the accuracy of the information contained in the dossier.

"We stand by the September dossier," Blair's official spokesman said.

The dossier was one of two put forward by Blair's government about Iraqi weapons that were key to persuading lawmakers to back sending troops to participate in the U.S.-led invasion of Iraq in March.

The failure to find banned chemical, biological or nuclear arms since Saddam's ouster has raised questions about the intelligence.

However, the cross-party committee also said Blair misrepresented to lawmakers the status of the second dossier, published in January, which included material copied from a graduate thesis posted on the Internet.

The committee said that it was "wholly unacceptable" for the government to plagiarize work without attribution, as happened with the January dossier.

By telling lawmakers that the document represented "further intelligence," Blair "misrepresented its status," the committee's report said, though it acknowledged the prime minister only learned of its provenance later.

Foreign Secretary Jack Straw said the government believed it had been right in taking military action, despite the failure by coalition forces to find banned weapons since Saddam's ouster.

"Of course I understand that the public would like to see further evidence of the possession of chemical and biological weapons capability and plans to build nuclear capability," Straw told reporters. "But the evidence available…at the time we took the decision to go to war was overwhelming."

Straw again demanded an apology from the British Broadcasting Corp., which in May quoted an unidentified intelligence source as claiming Blair aides redrafted the September dossier to include the 45-minute claim and boost the case for war.

Blair has described the BBC report as "absurd," while communications chief Alastair Campbell said it was a lie.

The Foreign Affairs Committee, which questioned Campbell, said the powerful communications chief "did not exert or seek to exert improper influence" in including the 45-minute claim in the September document.

That verdict was only reached after the committee chairman, ruling Labor Party lawmaker Donald Anderson, used his tie-breaking power as chair to exonerate Campbell.

Members of the committee complained that they had not been given access to key intelligence information.

However, the report said it was wrong for Campbell — an unelected special adviser hired outside the civil service system — to have chaired a meeting on intelligence matters, and said the practice should cease.

Campbell wasn't named in the original BBC report as having inserted the 45-minute claim. But a subsequent Mail on Sunday newspaper article by the BBC reporter, which was based on the same intelligence source, identified Campbell.

The government has acknowledged that the 45-minute claim was based on a single source, which it considered reliable. The committee urged the government to explain why it gave the claim such prominence, given that the source was uncorroborated, and asked officials to say whether they still believed the claim had been accurate.

John Stanley, a Conservative member of the committee, said the quality of the September dossier was of "paramount importance."

"Never before has Britain gone to war on the basis of an intelligence assessment," he said.

Stanley said it was still too early to say whether the September dossier was correct or not, but that concern would grow if more time passed without evidence being found.