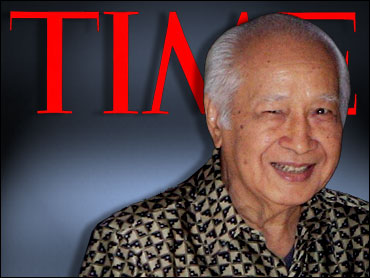 The May 1999 cover story in the magazine's Asian edition said much of the money had been transferred from Switzerland to Austria before Suharto stepped down amid riots and pro-democracy protests in 1998.

Suharto, who said the article defamed him and the state, filed a lawsuit with the Central District Jakarta and later the Jakarta High Court, both of which ruled in Time's favor.

The Supreme Court overturned the decisions on Aug. 31.

"Time magazine has to pay $106 million for defaming Suharto," said Supreme Court spokesman Nurhadi, who like many Indonesians uses only one name. "The article and photographs hurt the image and pride of the plaintiff as a great retired army general and the former Indonesian president."

The former dictator, now 86, seized power in a 1965 coup that left up to half a million people dead and ruled the country with an iron fist for the next three decades, killing or imprisoning hundreds of thousands of political opponents.

He has evaded prosecution on charges of embezzling state funds, with lawyers successfully arguing he is too ill to stand trial, and has never been tried for human rights abuses.

The Time article, titled "The Family Firm," alleged that Suharto and his children amassed $73 billion, the bulk from oil and mining, forestry, property, banking and petrochemicals, but lost much of it during the 1997 Asian financial crisis.

Time could not be immediately reached for comment about the court ruling, details of which were not made public. But earlier, the magazine, owned by Time Warner Inc., said its article was based on four months of reporting in 11 countries that uncovered a complex network of corporate investments, bank transfers and property holdings in Switzerland, Uzbekistan and Nigeria.