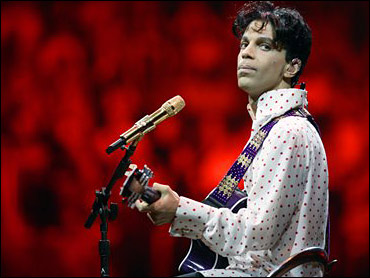 Sitting in his purple-draped dressing room, sipping tea amid sweet-scented candles, Prince is as peaceful and serene as a superstar could be before showtime - until you utter THAT ONE WORD:

Just mention the idea that his latest album, "Musicology" -- coupled with a tour, TV specials and magazine covers -- has anything to do with regaining the spotlight, and a slight frown falls over Prince's chiseled, pretty face.

"I would ask people who want to call this a comeback, where they think I'm coming back from?" the 45-year-old star, neatly dressed in a taupe suit with matching heels, told The Associated Press during an interview backstage at the St. Pete Times Forum.

"They want to see me as having failed."

By "they," he means critics, who point out it's been more than a decade since the regal performer dominated the spotlight. His star burned brightest in the 1980s and early '90s as he sold tens of millions of albums behind hits like "Kiss," "Little Red Corvette," and "Purple Rain," from his blockbuster 1984 movie debut.

Back then, Prince's was part of the pop trifecta of superstars - as popular as Michael Jackson or Madonna, yet still in a class of his own. He was considered a musical genius, dazzling audiences with his guitar, piano or feverishly dancing footsteps. He always wrote and produced all of his own songs, which ranged from pop to R&B to rock, and from romance to raunch.

The reclusive musician was always something of an enigma. After his much-publicized dispute with Warner Bros., he not only became more of a puzzlement, but one big unpronounceable symbol (which is what his name became). As he abandoned major record labels and released music primarily through the Internet and on his own, his star power and sales dwindled to a fraction of their former levels.

But Prince - who in person is chatty, warm and thoughtful, a marked contrast to the unapproachable image of his past - sees it differently. In his eyes, he has been more successful on his own. He mentions two projects that sold more than 100,000 copies. For a superstar like Prince, by industry standards, that would be deemed a failure.

"(But) I get all the money from that, so when you do the math on that, it's a big day at the races," Prince quips in his deep voice. "My bankers are very happy with me."

While Prince stresses he holds no bitterness, he clearly does not regard the music industry with much regard. He likens it to "The Matrix," and in going independent, he decided to take the little blue pill.

He proudly notes that he determines where his records are sold, when he goes on tour and what kind of music he puts out.

"When you show you can be successful as an independent artist, the umbilical cord is broken," Prince says. "(Record contracts are) a parent-child relationship. An advance is an allowance. Any business situation is restrictive."

Yet for "Musicology," he went to Columbia Records - part of the Sony conglomerate - to manufacture and release it in conjunction with his own label, New Power Generation (NPG) Records.

And the typically reclusive entertainer -- who gives few interviews and happily lives life out of the limelight with his wife and former employee, Manuela Testolini, in his hometown of Minneapolis -- has suddenly become more visible.

In February, he kicked off the Grammys with a performance with Beyonce; he also made an appearance on Ellen DeGeneres' talk show. More media appearances followed, and it didn't hurt to be inducted in the Rock and Roll Hall of Fame in March, where he again wowed audiences.

Seems like a guy who's looking to reclaim his throne. And it seems to be working - "Musicology" debuted on the charts at No. 3, selling about 192,000 copies.

Except Prince says he never stopped being a success - it's just that people weren't paying enough attention.

"Leno -- this is the fourth time I've played it," he says of his recent appearance. The Grammys? "Every year they ask me to play the Grammys. I just said yes this year."

And his link with Columbia?

"They're augmenting the project -- they're not the promised land," he says. He notes that he had a similar deal with Arista in 1999 and may put out an instrumental release on Blue Note Records this year.

Yet even Prince's longtime lawyer, L. Londell McMillan, notes that Prince was ready for a larger audience to hear his new music.

"He's in a place where he would like his music, and 'Musicology,' to be part of a paradigm of embracing music again," McMillan told AP. "We've had a long long little rut there of overly produced music, lip-synching artists and the like, and heavily formatted radio hits that the real artistry of music has suffered."

"He's made a record that he wants to reach as many people as possible, and the time was right," says Michele Anthony, Executive Vice President of Sony Music Entertainment, who along with Sony Music U.S. President Don Ienner cultivated their relationship with Prince into the new deal. "I think there's no doubt that there's a whole new generation of kids that are discovering Prince."

In fact, Prince has fashioned "Musicology" as a lesson to new acts who care more about making hits than crafting musical gems.

"I really missed a lot of songwriting in music," he says. "There's not a lot of music. There's grooves, there's hooks. There just isn't any songs out there."

More disturbing to Prince, however, is the content. Rump-shaking video girls and songs that promote violence, sex and drugs -- especially in rap and R&B -- leave him shaking his head and chastising record executives who should know better.

"What you won't show your kids, don't show ours," he declares.

Of course, this is coming from a man who was one of the reasons parental advisories became standard on explicit records-- his sexually charged material enraged many for years, and he never seemed to run out of ways to shock. (Remember the infamous "butt-out" pants he wore on an MTV Awards show?)

But the Prince of today is a Jehovah's Witness who refrains from cursing and won't sing those racy songs now. He frequently uses Bible verses and parables in conversation as he bemoans the lack of morality in today's culture.

"What we have today is the same situation right now that Noah faced," he says. "Some rain is going to come, and it's time to get on the ark. The best thing we can do is to keep our lives in order and our conduct clean."

He is surprisingly unrepentant, however, about his dirty past. "I didn't have any regrets about that - I was a young man," he says.

Once he got older, both he and his music evolved, which he calls an ongoing process. Besides, if you listened closely, he says, his albums have always including a political and social subtext-- it's just that society wanted to focus on the graphic material.

"During that time period, God knows where my heart was," he says. "That's why you have to focus on today."

He chuckles at a recent conversation he had with radio personality Tom Joyner.

"'I thought you'd be the one in some kind of scandal,"' Prince recalls Joyner saying - unlike Michael Jackson, now fighting a second allegation of child molestation.

"What are my contemporaries doing now?" Prince says passionately. "I'm not entangled in a bunch of lawsuits and a web that I can't get out of. I can hold my head up ... a happily married man who has his head in order. There isn't a bunch of scandal in my life."

Prince may never replicate the record sales or airplay of his heyday, but it's clear he doesn't think those were ever his glory years - he's living them now.

"There ain't nothing that I feel in lack of," he says. "It's a wonderful day."