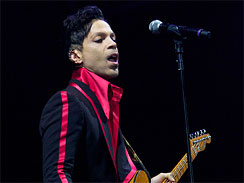 U don't have 2 be rich 2 be his girl, but U do have to dance. Kim Kardashian learned the hard way: When Prince asks you to bust a move, you bust a move or face the consequences.

During his show at Madison Square Garden in New York Monday night, Prince asked people to come onstage one at a time to get funky with him. One of those people was Kim Kardashian.

(Click through to watch video of Prince booting Kardashian.)

In a YouTube video posted on the LA Times' gossip site, Kardashian is led onstage and Prince shouts, "Turn it up, band!" He then turns to her and yells, "Come on!" breaking into a groove himself.

Kardashian appears to freeze up, putting her hand to her face and then touching Prince's shoulder, laughing. After a few moments of non-action from Kardashian, Prince asks the band to bring it down and then says to her, "Get off the stage!" He then gives her a push as she makes her way to the stairs.

It didn't end too badly, though. The LA Times reports that Kardashian was asked onstage again and danced while Prince played the piano.