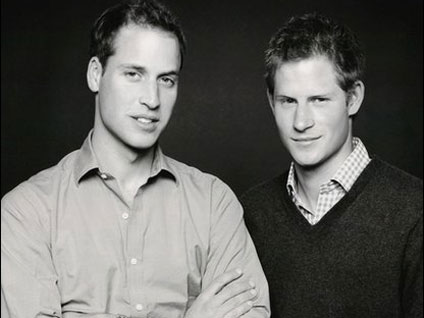 NEW YORK (CBS) A previously unseen portrait of Prince William and Prince Harry has been revealed, five years after the black and white photo was taken.

The image by photographer Fergus Greer was shot in 2006 for the 2007 Concert for Diana, which commemorated the 10th anniversary of their mother's death.

The shot was never published and remained out of sight until now.

In the photo, William, now 28, and Harry, 26, are seen posing together in jeans and open-necked shirts.

It was taken at the Royal Military Academy Sandhurst in Surry, Engand, shortly before William graduated from the training center while now-fiancee Kate Middleton looked on from the stands. Harry, who preceded William at the academy, was serving as an officer at the time.

The image is to be displayed at the National Portrait Gallery in London beginning Feb. 7, as part of a collection that includes other famous Brits like singer K. T. Tunstall and actors Brian Cox and Andy Serkis, according to People magazine.