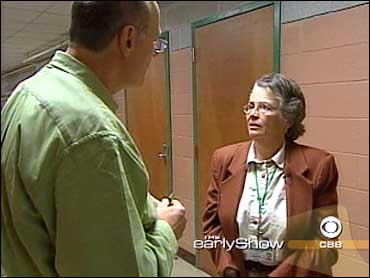 Ben Franklin High School, one of New Orleans' top high schools,
suffered heavy flood damage, and for a while, it appeared that there was
little hope of getting the mess cleaned up.

The school reopened this week, thanks to the grit and determination of the school's dedicated principal. The Early Show anchor Harry Smith has the story of how she defied the bureaucracy and
naysayers in order to get her school up and running.

It's going to take a little getting used to, that the gym is now the cafeteria at Benjamin Franklin High School in New Orleans. The students don't seem to mind, though. They are just so happy to be back in their beloved school.

"This was my home. This school was my home," said senior Michelle Taylor. "To come back here was bringing something that was normal to my life."

Ben Franklin is one of the best public high schools in the country -- a magnet for the city's smart and motivated students. Like so much of this city, it lay in ruin after the storm.

When Principal Carol Christen first laid eyes on the devastation, she said she broke down and cried.

"I still have that picture in my head, and that's uh, it was unbelievable," she said.

The neighborhood across the street still looks much the same, but that day, Christen had a revelation. Since the flood didn't reach the second and third floors, there would be space to teach.

"I could not see this school dying, OK, for its students and future students," Christen said.

So with the help of football coach Charles Firneno, the school community set to cleaning things up -- and not always by the book.

"In 14 years of the Marine Corps I learned that it's easier to beg for forgiveness than ask for permission sometimes," Firneno said.

Debris wasn't the only obstacle to reopening the school. The red tape and politics seemed insurmountable. The students wouldn't be back in the hallways of the school had Christen, the staff and the parents not taken over control of the school themselves.

"She's been the driving force and she knew right away that we had to do something -- that the school would not survive with the same standards, maybe not at all, if we didn't act quickly," according to administrator Duris Holmes.

Some of Ben Franklin's students were in school as far away as Florida. Now they and their families have a reason to come home again.

"You think when you were here before that it's so hard and you don't want to be here, but once it gets taken away from you, you realize what you have… and it's really important," junior Jessie Otis said.

What was it like for Firneno to return to school and see the hallways full of students?

"Well, I almost lost it in the gym just looking at all the kids - it was a very emotional moment," she said.

New Orleans has its best high school back and the hero of this story should be its principal. But...

"This is about the school, not me OK," she said.