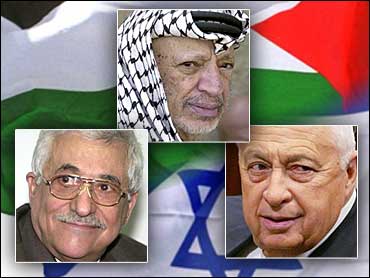 Despite turmoil within the Palestinian leadership, Israeli and Palestinian officials met Thursday to discuss an impasse over the release of prisoners, a flashpoint that threatens to undermine a truce declared almost two weeks ago.

CBS News Correspondent Robert Berger reports it appears the prisoner issue, which is not mentioned in the U.S.-backed peace plan, is preventing the so-called "road map" from leading anywhere.

Israeli Defense Minister Shaul Mofaz and Palestinian security chief Mohammed Dahlan met at an Israel-Gaza crossing point, where they were to discuss the prisoners and other issues.

Palestinians demand that Israel release all the estimated 7,000 prisoners it holds. Otherwise, militant groups threaten to cancel the truce. Israel, noting that release of prisoners is not part of the U.S.-backed "road map" peace plan, has agreed to release only a few hundred as a goodwill gesture.

As the talks were in progress, the military said three Palestinians crossed the security fence and tried to enter an Israeli village outside northern Gaza. Not far away, one Palestinian crossed the fence from Gaza into Israel and approached another village.

Soldiers stopped the attempts, wounding two Palestinians and capturing all four. Their motives were not clear, and it was not immediately known if they were armed. Often Palestinians try to slip into Israel to look for work, but there have also been terror attacks.

Late Thursday, Palestinians fired on a car on a highway next to the West Bank, police said, but no one was hurt. Police were searching the area.

The Mofaz-Dahlan meeting was in doubt throughout the day because of Palestinian infighting, partly over the prisoners issue.

Yasser Arafat appeared to be trying to reassert more control over Palestinian diplomacy through his Fatah movement, as Palestinian officials and militants criticized Prime Minister Mahmoud Abbas over his handling of the prisoner issue.

A statement from the Fatah Revolutionary Council said the advisory body within Arafat's Fatah movement would meet on a regular basis "to enable (it) to assume its leading role in drawing up the movement's policies and follow up the implementation of its decisions," the Palestine Media Center said.

Under the law creating the position of premier, passed in April, Arafat's Fatah executive retains the final say in talks with Israel. The latest Fatah statement, pledging constant supervision of Abbas, indicates Arafat will retain hands-on involvement, despite an Israeli and U.S. boycott over allegations he is tainted with terrorism.

Earlier this week, Abbas threatened to resign as prime minister unless Fatah endorsed his handling of contacts with Israel. However, on Wednesday he said he would not step down.

Palestinian Foreign Minister Nabil Shaath said Thursday the leadership crisis was over. However, internal disagreements remained over how to deal with the prisoner issue.

Abbas has been criticized by Palestinian officials and militants who accuse him of not being tough enough on the prisoner release issue. Abbas called off a meeting with Israeli Prime Minister Ariel Sharon set for Wednesday.

Dahlan said Thursday he and Mofaz would discuss the crisis over the estimated 7,000 Palestinian prisoners held by Israel and the Palestinian demand that Israel withdraw from more Palestinian cities and towns. Israeli forces have already pulled out of key parts of the Gaza Strip and the West Bank town of Bethlehem.

Dahlan said the prisoner issue "is a major matter for ... the Palestinian people."

A high-level Egyptian delegation was in Gaza, meeting with leaders of the factions, trying to solidify the truce. However, Hamas and Islamic Jihad would not commit to halting attacks against Israelis beyond three months. Fatah has called a six-month truce. All three factions point to the prisoner issue as the main sticking point.

U.S. officials have been meeting with Palestinian and Israeli officials to resolve the prisoner dispute, and Israel Radio reported Thursday that Israel was considering releasing at least some members of the two Islamic groups.

Officials would not confirm this, but Mofaz expressed optimism that talks with Dahlan would be productive.

"There will be more crises during the process of dialogue ... but the negotiations will continue, and there is a foundation to the assessment that we will make progress," he told the Israeli daily Yediot Ahronot.