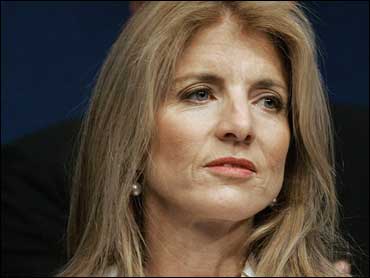 This story was written by Anne E. Kornblut.

Even as one of Barack Obama's most famous surrogates, Caroline Kennedy tried to avoid attention on the presidential campaign trail, forgoing big rallies for more modest tasks such as carrying a clipboard to register voters and walking through a flea market to shake hands.

Famously private, Kennedy nonetheless emerged during the Obama campaign as a political force of her own. Along the way, friends and colleagues say, she discovered that she had a higher tolerance than she thought for public appearances and a long-dormant desire for public service.

Now, Kennedy, 51, the only surviving child of former president John F. Kennedy, is the front-runner to assume the Senate seat in New York once held by her uncle Robert F. Kennedy and soon to be relinquished by Hillary Rodham Clinton.

Although there are other contenders for the job, establishment figures have quickly closed ranks around Kennedy. Yesterday, Senate Majority Leader Harry M. Reid (D-Nev.) became the latest to voice his support for having New York Gov. David A. Paterson (D) appoint Kennedy to replace Clinton when she becomes Obama's secretary of state.

Trying to explain the political ambitions of Kennedy, who was sheltered from the glare of publicity after her father's assassination in 1963 and has rarely emerged from it since, several people close to her said yesterday that she had long expressed a desire for a more active public life.

Joel I. Klein, chancellor of the New York City Department of Education and a Kennedy confidant, said he had a conversation with her eight years ago in which "it seemed to me she was now ready to start moving back into the public sector." The Obama campaign, he said, "was obviously a major turning point," adding that it "probably surprised" Kennedy how much she enjoyed the campaigning.

"Certainly this year she's played a very significant role in the presidential campaign, and I think that has very much crystallized her interest in serving," said John Shattuck, chief executive of the John F. Kennedy Presidential Library Foundation in Boston, who has worked with her since 2001. "But this is something that's been a long time coming."

Most of the country has caught only occasional glimpses of Kennedy's evolution from a young girl, shielded by her mother after her father's death, to a poised, intellectual mother of three who is devoted to quiet reflection and philanthropic causes. Her life, led mostly in New York City, has been marked by her family's tragedies, including the death of her brother, John F. Kennedy Jr., in a plane crash in 1999, and her uncle Edward M. Kennedy's battle with brain cancer.

A lawyer and the author of several books, Kennedy is perhaps most acclaimed for raising tens of millions in private money for the New York City school system. She works with multiple foundations, playing an active role in the Kennedy library and the Institute of Politics at Harvard University. She has dipped in and out of the public eye over the years; she was sometimes referred to by her married name, Schlossberg, and at other times just as Kennedy, which, an aide said yesterday, is what she prefers.

Although she has been an important symbol in Democratic politics throughout her life, and participated in tributes to the Kennedy family in earlier party conventions, it was not until the 2008 primaries that she exerted her own influence in a forceful way. On the heels of Obama's major victory in the South Carolina Democratic primary in late January, Kennedy added to his momentum in a way that would be unstoppable, declaring on the opinion pages of the New York Times: "I have never had a president who inspired me the way people tell me that my father inspired them." It was the first time she had endorsed a presidential candidate in the primaries since her uncle Ted ran in 1980.

During this year's primaries and the general-election campaign, Kennedy made some high-wattage appearances, including on NBC's "Meet the Press," alongside her cousin Maria Shriver, and at the Democratic National Convention. She shared the stage with Obama's wife, Michelle, at a Los Angeles rally that also included Oprah Winfrey.

But much of Kennedy's work was far more low-key. She worked phone banks and chatted up people on the street. One Obama adviser said she did not want the campaign to build large crowds for her events, instead hoping to blend in during small-scale appearances. "She liked getting her hands dirty and going and doing sort of basic work," the adviser said, speaking on the condition of anonymity because the president-elect has not formally weighed in on the New York Senate seat, although several members of his operation said yesterday that they are eager to see Kennedy get the job.

Clinton has expressed no opinion on who should succeed her.

Kerry Kennedy, who is divorced from Andrew Cuomo, another potential candidate for the seat, is among the relatives who have begun speaking out on her behalf. Kerry Kennedy said this week that there are three central reasons to appoint her cousin to the Senate: her grasp of financial matters, her scholarship of the Bill of Rights and her experiences as a working mother. "There are very few women in the Senate and very few mothers," she said on CNN. "And we really need someone with that experience, and I think Caroline will be great."

Ted Kennedy, a Democratic senator from Massachusetts, has openly encouraged his niece to seek the seat, advisers said.

Rivals have emerged for the position, among them candidates who have long held ambitions for higher office in New York, and some columnists around the country have dismissed the idea of the Senate seat being treated, in the words of conservative columnist George F. Will, like a family heirloom. Rep. Gary L. Ackerman (D) told a radio host last Wednesday that he did not know what Kennedy's qualifications are, "except that she has name recognition -- but so does J-Lo."

Other potential challengers, however, have been reluctant to speak negatively about the woman who could well be the next senator. Rep. Carolyn B. Maloney (D), thought to have a good shot at the Senate seat until the Kennedy name was raised, said yesterday: "It appears to be a widening field, and I'm honored to be among those mentioned. But this decision is solely Governor Paterson's decision. I am just concentrating on my work."

Rep. Gregory W. Meeks (D), whose name has come up as another possible candidate for the seat, said that he spoke to Paterson on Monday and that the governor was far from making a choice.

"I just can't emphasize enough that in my conversations with the governor, he has not made a decision yet," Meeks said. "It should not be a foregone conclusion that she will be an appointment."

And Robert Zimmerman, a Democratic National Committee member from New York, said Kennedy may have a tough case to make.

"She certainly has a life of great personal accomplishments," he said. "But she has to make the case why her experience qualifies her for the U.S. Senate.

"This is not an election about name recognition," he added. "It is about who can best serve the state of New York."