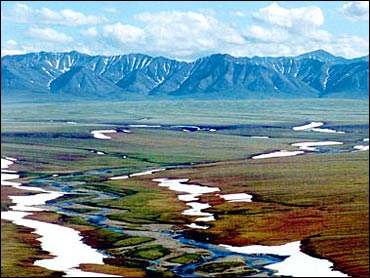 The House approved sweeping incentives Friday for oil and gas production, including a green light for drilling in an Alaska wildlife refuge, despite complaints that the legislation gives too much to energy companies and does little to promote conservation.

The bill, approved 247-175, now awaits action by the Senate, which is expected to consider a less industry-friendly energy bill next month.

Republican leaders called the legislation a fair balance that is designed to spur development of traditional fossil fuels as well as renewable energy such as wind power through a mix of tax breaks, federal royalty relief and opening new areas of production such as the Alaska refuge.

"It advances a balanced approach to energy production and use," said Rep. Billy Tauzin, R-La., the bill's floor leader.

An attempt Friday to strip the measure of many of its incentives for oil and gas development was rejected 251-171. It was one of a string of Democratic amendments, including one that would have required increased fuel economy for automobiles, that were defeated.

The oil and gas subsidies "will put hundreds of millions of dollars into the already deep pockets of the major oil companies," complained Rep. Ron Kind, D-Wis. The bill's supporters said most of the benefits will go to small, independent producers who otherwise would not pursue deep drilling or develop marginal wells.

In all, the bill provides $18.7 billion in tax breaks, mostly aimed at the oil and gas, nuclear and coal industries.

The White House strongly supported the House bill, which mirrors many of the energy priorities developed two years ago by Vice President Dick Cheney's energy task force. But the administration raised concerns about the breath of the tax breaks, which are nearly twice what the administration had wanted.

As it did two years ago, the House called for opening the coastal plain of the Arctic National Wildlife Refuge to oil development, a top priority of the administration, despite strong protests from environmentalists. The Senate last month rejected drilling in the refuge and Democrats there have vowed to block any energy legislation that would lift the current drilling ban.

An attempt to remove the ANWR language in the House was defeated 228-197.

House Republicans, both during committee action and on the House floor, turned back attempts to tilt the legislation more toward energy conservation and away from incentives for production, chiefly fossil fuels.

Although the bill contains some tax breaks for buying solar heating equipment and more efficient appliances, a proposal to require automakers to produce cars that burn 5 percent less fuel by 2010 was rejected 268-162. Cars burn 40 percent of the country's oil.

"How can we be silent on auto fuel efficiency if this bill is going to do anything at all?" asked Rep. Sherwood Boehlert, R-N.Y.

The legislation also includes provisions that benefit everyone from corn farmers who want to produce more ethanol to automakers seeking to develop hydrogen fuel cells and utilities that want to reduce their cost of building power lines.