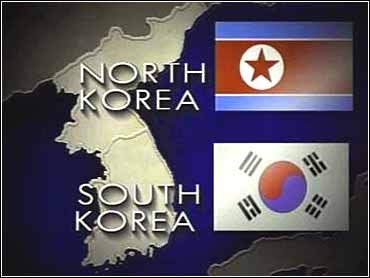 North and South Korea agreed on Wednesday to hold economic talks and briefly reunite families but failed to bridge the biggest gap -- when to hold military talks to help build a railway across the world's most fortified border.

The United States and Japan, preparing for their own talks with Pyongyang soon, will closely scrutinize the outcome of the three-day talks at a hotel in Seoul for clues about Pyongyang's latest diplomatic outreach and tentative economic reforms.

"It looks like they realized they can't get any financial aid from the international society as long as military tension persists on the Korean peninsula."

In a statement released after high-level talks and lower-level haggling, the two Koreas said they would arrange temporary reunions next month for families split for half a century and hold economic talks from August 26 to 29 in Seoul.

But, not for the first time, the North and South Korean versions of the statement differed on a key point.

"The two Koreas agreed to hold military talks as soon as possible and also agreed that each side needs to secure military steps shortly to help build railways and roads between the two Koreas," the South Korean version said.

The North's simply said: "Both sides agreed to make a proposal to their military."

Analysts speculated that the wording indicated that the North Korean government delegates did not have the power to decide on military issues.

South Korea had been looking for a fixed date for the military talks -- vital for a highly symbolic building project in one of the world's most dangerous border zones -- rather than a promise to sit down sometime, maybe.

Either way, the impression was that the North Koreans had avoided getting pinned down at the highest-level talks since the two navies clashed in disputed waters in June.

"We're not 100 percent satisfied with the outcome," Lee Tae-sik, the South Korean spokesman, told reporters when asked why they failed to specify a date for military talks.

A North Korean statement said: "Both sides have brought great pleasure and hope to the Korean people by joint agreement and setting up new schedules on pending issues."

The railway and a parallel road would be symbolic as the first to be reconnected through the Demilitarized Zone that has bisected the peninsula since the end of the 1950-53 Korean War.

The South has completed its railway and road right up to the edge of the DMZ, but the North has done little on a scheme first agreed when South Korean President Kim Dae-jung and North Korean leader Kim Jong-il met in June 2000. There are grander plans for a new route to link up with the trans-Siberian railway.

The family reunions -- the most recent were in April and May -- will be held around the September 21 Chusok national holiday at the North Korean resort of Mount Kumgang. Families meet for two or three days and then part again.

The economic talks take on extra significance because Pyongyang has just embarked on a tentative and piecemeal reform path. In the latest move, diplomats in Pyongyang said the North had slashed the value of its won and abolished a convertible version of the currency used in transactions with foreigners.

North Korea's economy is creaking and many of its people are malnourished, aid agencies say. South Korean Agriculture Minister Kim Dong-tae told reporters Seoul was willing to increase its offer of 300,000 tons of rice on credit to the North.

One subject not discussed was the fate of thousands of North Korean refugees in China and many asylum seekers who have entered embassies in Beijing. Two North Koreans climbed into the Albanian embassy on Tuesday and asked to go to the South.

So far this year China has allowed scores of asylum seekers to leave for Seoul, but through a third country to avoid offending its ally, technically still at war with the South.