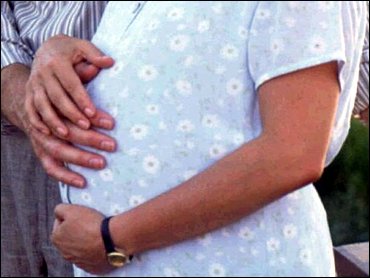 There may be new hope in the fight against preeclampsia, a condition that appears before a more advanced one that can be life-threatening to both mother and child. Preeclampsia affects as many as 200,000 pregnant women in the United States each year.

Researchers from the /National Institutes of Health say findings of a study appearing Thursday in the New England Journal of Medicine may one day be used to develop a test to alert women to the possibility of preeclampsia.

On The Early Show Thursday, medical correspondent Dr. Emily Senay noted that preeclampsia hits some three-to-five percent of pregnant women in the U.S.

Commons signs include high blood pressure, swelling, sudden weight gain, changes in vision, and protein in the urine, after 20 weeks of pregnancy or so. Preeclampsia usually appears in the third trimester, but can develop any time in the second half of a pregnancy, as well as during labor or after delivery, usually in the first 24 to 48 hours.

The more severe the preeclampsia is and the earlier it occurs in the pregnancy, the higher the risk to the health of mother and baby. Left untreated, it can progress to eclampsia, which can kill both of them. Seizures are one sign of eclampsia.

Most women who get preeclampsia only develop a mild version near their due date, and it doesn't harm their baby, Senay explains. But, if it's severe and occurs early in the pregnancy, the baby would have to be delivered prematurely, which can cause blindness, cerebral palsy, learning disabilities, and even death.

Approximately 75,000 women worldwide die each year from this condition, but it's mostly in developing countries, where the women do not have access to good healthcare.

In the U.S., fewer than 100 women die from preeclampsia each year.

The biggest concern about a woman developing preeclampsia in this country is the baby having to be born prematurely and not surviving. The woman's life is always the most important concern for the obstetrician.

The researchers who worked on this NIH study identified two proteins in the blood of pregnant women that were elevated that appear to contribute to preeclampsia. They found that one of these proteins is elevated two-to-three months before symptoms of preeclampsia appear.

Dr. Richard Levine, the study's senior investigator, said he hopes this information can be used to develop a test looking for those proteins to predict who is likely to get preeclampsia, and to help diagnose the disease.

"This is preliminary research" Senay cautioned. "It may be a few years off yet before we see this on the shelf. But a way to diagnose and predict it would be a huge help for many women."

Senay observes that doctors can have difficulty diagnosing preeclampsia because it can mimic other conditions. For instance, if a woman who is 26 weeks pregnant is brought into an emergency room and is having seizures, doctors don't know if she has eclampsia, the most serious form of this condition, or if she has epilepsy. If it's epilepsy, they wouldn't do anything but wait for the seizures to subside and, when she wakes up, ask if she has epilepsy. If she has eclampsia at 26 weeks, the baby would have to be delivered for the sake of the mother's health, and it's unlikely that the baby would survive.

Last month, Senay added, some good news came from a study that looked at whether taking a multivitamin supplement before conception could reduce the risk of the mother developing preeclampsia. The research showed that women who are not overweight before pregnancy and who used multivitamins at least once a week before conception and in the first three months of pregnancy reduced their risk of preeclampsia by 72 percent in comparison to those who didn't take a multivitamin during this period.

Senay concluded on a very encouraging note. She said we may see a cure or treatment for preeclampsia in a few years: Researchers have been able to reverse the condition in rats.