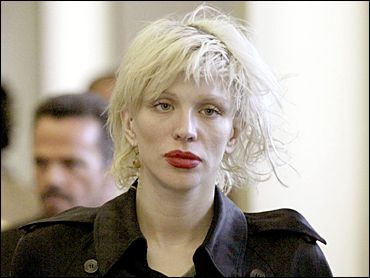 The prosecutor in the misdemeanor drug case against Courtney Love said Monday she tested positive for cocaine when she was arrested last year.

After a judge continued the trial to May 25, Assistant City Attorney Jerry Baik told reporters outside the courtroom that Love tested positive for several illegal drugs after the October arrest, including cocaine. He declined to identify the other drugs.

Love did not appear at the Monday court hearing, one of two cases stemming from Oct. 2 incidents.

She faces misdemeanor charges of being under the influence of a controlled substance and disorderly conduct after being arrested for allegedly trying to break into the Los Angeles home of a former boyfriend.

After her release, emergency workers were called to her home and took her to a hospital for a drug overdose. Police have testified she handed one officer a plastic bag of pills, which were later identified as oxycodone and hydrocodone — painkillers for which her attorney claims she had prescriptions.

Love was charged with two felony counts of possession of controlled substances. She faces more than three years in prison if convicted.

The felony and misdemeanor cases are being tried separately.