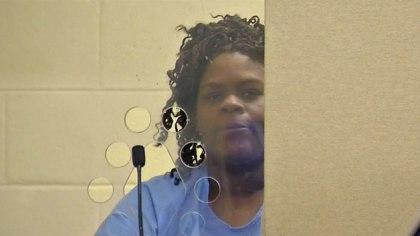 BROCKTON, Mass. -- A woman has been charged with stabbing two of her children to death in their Massachusetts home in what prosecutors have called a "ritual incident," the Boston Globe reports. At her arraignment Tuesday, prosecutors said a boy was stabbed as many as 50 times.

According to court documents obtained by CBS Boston, family members told investigators that 43-year old Latarsha Sanders had practiced voodoo; though the D.A. did not confirm the deaths were voodoo related.

Local police say that Sanders acted alone when she stabbed her 5-year-old son and 8-year-old son multiple times at some point over the weekend, a crime officials have called "gruesome, disturbing and heartbreaking."

The boys' bodies were discovered in their Brockton apartment on Monday after Sanders asked a neighbor to call 911 because she was having a medical issue. When authorities arrived, the neighbor told police that there were children in the apartment, so they checked and discovered them.

Lason's body was reportedly found beneath a blanket with a white bandage on his neck, and Edson Brito was found in another room with massive injuries.

Authorities identified the two boys Tuesday as brothers Edson "Marlon" Brito, 8, and Lason Brito, 5, the paper reports.  The boys were last seen by their grandmother on Saturday, prosecutors said.

Prosecutors say Sanders has a third child who is safe.

Citing a prosecutor's statements in court, the Boston Globe reports Sanders is accused of stabbing the eight-year-old 50 times with a kitchen knife as part of a "ritual incident," and then attacking her five-year-old when she concluded the first child's death hadn't completed the ritual.

"She said she had stabbed him because she had 'failed' in the ritual with Marlon," assistant Plymouth District Attorney Jessica Kenny told a judge during Sanders' arraignment on murder charges in Brockton Tuesday, according to The Boston Herald. "She responded to police that she felt bad about what she had done."

Sanders then allegedly placed the boys' bodies in beds, mopped up blood on the kitchen floor and left the knife lying in the sink, according to a statement issued by the District Attorney's office. She never sought medical attention for the boys.

"We believe, based upon her comments, that she was involved in some sort of rituals that she believed in," Plymouth District Attorney Timothy J. Cruz  told reporters outside the courtroom, reports the Boston Globe. "Suffice it to say, it's something she referred to throughout her life to other people in her family, or at least for the last couple of years. . . . We don't have a lot of clarity to a lot of the things she was saying at this point."

During a series of interviews, Sanders reportedly gave several explanations for the deaths, including that she was motivated by "voodoo stuff" and that her 16-year-old daughter "wanted a little blood," the paper reports. Cruz told reporters investigators aren't sure what prompted the attack and there was no clear evidence it was motivated by religious beliefs or as a part of a voodoo ritual, according to the Boston Globe.

Sanders was taken away in an ambulance, according to a neighbor.

"She looked like she was kind of limp, sitting there until they put her on a stretcher and then she kind of started screaming and kicking," he said.

Sanders pleaded not guilty to two counts of murder Tuesday. She was ordered held without bail.

Her lawyer, Joseph Krowski Jr., said he had just begun representing her Tuesday morning and didn't comment on the specific accusations.

Plymouth District Attorney Timothy Cruz says an investigation into the woman's motive is ongoing. According to a spokeswoman for the D.A., the Sanders case is unrelated to a child abuse incident in which a 5-year-old girl was burned during a voodoo ritual in nearby East Bridgewater last week. Both cases are being handled by the Plymouth County D.A.