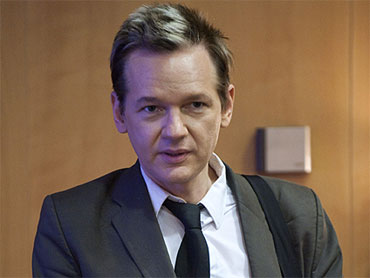 Swedish prosecutors withdrew an arrest warrant for the founder of WikiLeaks on Saturday, saying less than a day after the document was issued that it was based on an unfounded accusation of rape.

They said that for the moment Julian Assange remains suspected of the lesser crime of molestation in a separate case.

The accusations have been labeled a dirty trick by Julian Assange and his group, who are preparing to release a fresh batch of classified U.S. documents from the Afghan war.

Swedish prosecutors had urged Assange — a nomadic 39-year-old Australian whose whereabouts were unclear — to turn himself in to police to face questioning in the case involving suspicions of rape and the other based on an accusation of molestation.

"I don't think there is reason to suspect that he has committed rape," chief prosecutor Eva Finne said, in announcing the withdrawal of the warrant.

"The prosecutor hasn't made a decision" on that count, Rosander said. "The investigation continues."

Assange had dismissed the allegations in a statement on WikiLeaks' Twitter page, saying "the charges are without basis and their issue at this moment is deeply disturbing."

He was in Sweden last week seeking legal protection for the whistle-blower website, which angered the Obama administration for publishing thousands of leaked documents about U.S. military activities in Iraq and Afghanistan.

The first files in Wikileaks' "Afghan War Diary" revealed classified military documents covering the war in Afghanistan from 2004 to 2010. Assange said Wednesday that WikiLeaks plans to release a new batch of 15,000 documents from the Afghan war within weeks.

The Pentagon says the information could risk the lives of U.S. troops and their Afghan helpers and have demanded WikiLeaks return all leaked documents and remove them from the Internet.

Assange has no permanent address and travels frequently — jumping from one friend's place to the next. He disappears from public view for months at a time, only to reappear in the full glare of the cameras at packed news conferences to discuss his site's latest disclosure.

Assange declined to talk about his background at a news conference in Stockholm a week ago. Equally secretive is the small team behind WikiLeaks, reportedly just a half-dozen people and casual volunteers who offer their services as needed.

A WikiLeaks spokesman, who says he goes by the name Daniel Schmitt in order to protect his identity, told The Associated Press in a telephone interview from Iceland that the "extremely serious allegations" came as a complete surprise.

Apart from the comment from Assange, WikiLeaks' Twitter page had a link to an article in Swedish tabloid Expressen, which first reported the allegations.

"We were warned to expect 'dirty tricks.' Now we have the first one," it said.

Assange was in Sweden partly to apply for a publishing certificate to make sure the website, which has servers in Sweden, can take full advantage of Swedish laws protecting whistle-blowers.

He also spoke at a seminar hosted by the Christian faction of the opposition Social Democratic party and announced he would write bimonthly columns for a left-wing Swedish newspaper.