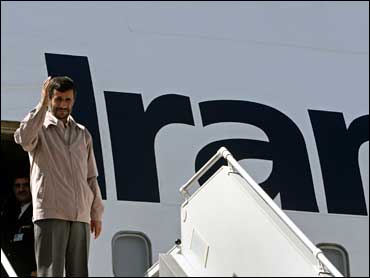 Critics of Iranian President Mahmoud Ahmadinejad started protesting even before the hardline leader made his scheduled arrival in New York for planned speeches at a high-profile university and the United Nations that have aroused a storm of opposition.

A group of about 40 elected officials and civic leaders demonstrated Sunday outside Columbia University, where Ahmadinejad was scheduled to speak at a forum on Monday. More protests were to follow on Monday near Columbia and the United Nations, where the Iranian president was to address the General Assembly on Tuesday.

Before leaving Tehran for the United Nations this morning, Ahmendinajad said he welcomed the U.N. as a forum to offer his solutions to the world's problems, reports CBS News correspondent Michelle Miller.

The Bush Administration says he's the problem, adds Miller, citing his calls for the destruction of Israel, Iran's role in supplying arms to Iraqi insurgents, and his alleged nuclear weapons program.

"This invitation is a slap in the face to all New Yorkers and especially to those families who lost loved ones on Sept. 11 right here in New York City," said David Weprin, a City Council member.

State Assemblyman Dov Hikind added, "He should be arrested when he comes to Columbia University, not invited to speak for God's sake."

Some political leaders and religious groups have said Columbia should not give Ahmadinejad a platform. Among them are the head of the City Council, Christine Quinn, who has said "the idea of Ahmadinejad as an honored guest anywhere in our city is offensive to all New Yorkers."

Columbia canceled a planned Ahmadinejad appearance last year, citing security and logistical reasons. In Tehran, Iranian Foreign Ministry spokesman Mohammad Ali Hosseini said there were "efforts to cancel" the upcoming Columbia speech, but the Iranian government was continuing to pursue the program. He did not elaborate other than to say pressure was being brought to bear on the program's sponsors.

Columbia has said Ahmadinejad has agreed to take questions and will be challenged to discuss his views on the Holocaust, Iran's nuclear ambitions and other issues.

Through a spokeswoman's recorded message on a telephone line set up to respond to inquiries about the speech, Columbia President Lee Bollinger said the university's commitment to "understanding the world as it is and as it might be" required engagement at times with "offensive and even odious" beliefs.

"It is a critical premise of freedom of speech that we do not honor the dishonorable when we open a public forum to their expressions. To hold otherwise would make vigorous debate impossible," the message said.

The telephone line was not accepting messages early Sunday, and Columbia representatives did not respond immediately to an e-mail message.

Some Columbia students, even some who plan to rally against Ahmadinejad, have said they support allowing him to speak.

Ahmadinejad said Sunday that the American people are eager to hear different opinions about the world, and he is looking forward to having the chance to voice them during his trip to the United States, Iranian state media reported.

Ahmadinejad said the American people have been denied "correct information," and his visit will give them a chance to hear a different voice, the official IRNA news agency reported.

"The United States is a big and important country with a population of 300 million. Due to certain issues, the American people in the past years have been denied correct and clear information about global developments and are eager to hear different opinions," Ahmadinejad was quoted by IRNA as saying.

State-run television also quoted Ahmadinejad before boarding his presidential plane Sunday as saying that the General Assembly was an "important podium" to express Iran's views on regional and global issues.

Ahmadinejad caused a stir earlier this week with a much-criticized request to lay a wreath at the World Trade Center site, an idea that prompted an outcry from politicians and Sept. 11 victims' families. Police denied the request, citing construction and security concerns.

In an interview to air Sunday on the TV news magazine "60 Minutes," Ahmadinejad indicated he would not press the issue but expressed disbelief that the visit to ground zero would offend Americans.

"What kind of damage will the U.S. face?" by Ahmadinejad visiting the site, Hosseini told reporters at his weekly press conference Sunday.

Despite the tensions between Washington and Tehran, many Iranians do not share their president's hostility towards the United States. After the Sept. 11 attacks, hundreds of young Iranians held a series of candlelight vigils in Tehran to express sympathy for the victims.

Ahmadinejad's visit to New York is being debated back home. Some in Iran think his trip is a publicity stunt that hurts Iran's image in the world.

"Many experts believe Ahmadinejad's previous two visits brought no achievement ... rather, it heightened tensions," the reformist daily Etemad-e-Melli, or National Confidence, said in an editorial Sunday.

But conservative lawmaker Alaeddin Boroujerdi said it was a good chance for Iran to air its position.

"This trip gives the president a good chance to meet world leaders and inform them of Iran's rightful position," IRNA quoted Boroujerdi as saying.