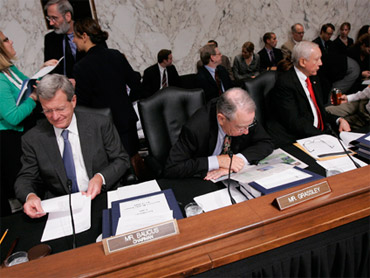 It'll be Democrat vs. Democrat as lawmakers go back to work on health care Tuesday.

The Senate Finance Committee is expected to consider whether the government should offer its own insurance plan for the middle class in competition with private carriers. A public option is the top goal for liberals, but it has no Republican support and moderate Democrats say the Senate will never go along.

So Tuesday's debate is expected to pit Democratic liberals against moderates.

Although the public plan isn't expected to get a majority of the panel, supporters say at least they'll know where everybody stands.

Finance Chairman Max Baucus, D-Mont., is already in the hot seat - accused of being lukewarm, if not downright hostile, to the government option.

Two liberal groups are launching a hard-hitting television and Internet ad featuring a young father from Montana. Bing Perrine, 26, in need of a heart operation, uninsured and deeply in debt, looks straight into the camera and asks Baucus, "Whose side are you on?"

The ad is sponsored by Democracy for America and the Progressive Change Campaign Committee, who say Baucus is too cozy with insurance and health care interests that have contributed to his campaigns and oppose the public option.

Baucus aide Tyler Matsdorf said the ad falsely implies that Baucus doesn't care about the plight of people with pre-existing health problems. It's just that Baucus would address such problems in a different way from what the liberals want, Matsdorf said. For example, his plan calls for nonprofit co-ops to compete with the insurance industry independently of the government. Insurers also oppose co-ops.

Senators will have at least two Democratic alternatives to choose from - and maybe a compromise from a moderate Republican who is keeping all her options open.

Sen. Jay Rockefeller, D-W.Va., is proposing a public plan modeled on Medicare, in which the government would set what it pays doctors, hospitals and other medical providers.

Sen. Chuck Schumer, D-N.Y., is proposing a government plan that looks more like a private insurance company and negotiates payment rates with providers.

"Win or lose, it's clear that the strong public interest and support for a public option will be well represented by the supportive senators," said Gerald Shea, a top health care policy expert for the AFL-CIO. "My sense is that our message about how vital the public plan is to the critically important issue of cost control is beginning to break through the bubble that has surrounded Finance for months."

The wild card in the debate is Sen. Olympia Snowe, R-Maine. Aides say she's considering offering a compromise that would use the public option as a threat, to be deployed only if private insurers fail to keep premiums in check after a reasonable period of time.

If there's a final bill this year, it's possible that Snowe's idea will be the one to carry the day.