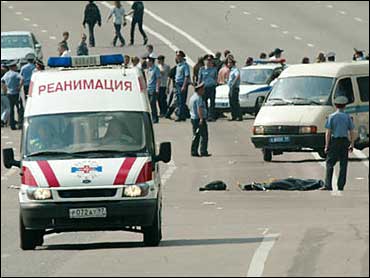 President Vladimir Putin cancelled a planned trip abroad Sunday because of suicide bomber attacks on a Moscow rock festival that killed 15 people, the Kremlin said, as police promised to hike up security.

The Kremlin did not elaborate on Putin's reasons for stopping the trip to Uzbekistan and Malaysia. But the decision could reflect concern over security — amid fears the bombings mean a new wave of Chechen attacks in Moscow — and lingering sensitivity to previous criticisms that the Russian leader is cold and distant in times of public crisis.

Two victims of the suicide blasts died overnight, bringing the death toll to 15 — including the two women who detonated the explosives strapped to their bodies — a city health official said Sunday.

Another 48 victims remained hospitalized Sunday, including 11 who were in serious or critical condition, said Lyuba Zhomova, a spokeswoman for the Moscow Health Directorate.

The Saturday afternoon blasts at the festival at a suburban airfield sharply renewed the sense of vulnerability among the sprawling city's 10 million people, where Chechen rebels last year held hundreds of hostages at a theater and a subway station bombing in 2000 killed 13 people.

Russian officials say they suspect Chechen rebels in the latest attack. No arrests have been made in the Saturday bombings and no one has yet claimed responsibility, but officials said a passport was found in the blood and debris showing that one of the bombers was a Chechen woman.

"The Interior Ministry asks citizens to show patience and understanding of such necessary measures," the ministry said in a statement.

The two women blew themselves up at separate gates into the Tushino airfield where up to 40,000 specatators were gathered to watch some of Russia's best known rock bands. Most of the casualties were caused by the second explosion, which took place about 10 minutes after the first and struck at gate through which the audience was being evacuated.

Guards at the festival entrances had been suspicious of the women and prevented them from entering the grounds, said First Deputy Interior Minister Rashid Nurgaliyev.

"When they approached the entrance, their agitation was visible. They tried to get in too fast and were turned away," he said.

The attack came hours after Putin signed an order setting presidential elections in Chechnya for Oct. 5. The elections are the latest step in Putin's strategy of trying to bring a political resolution in the Caucasus republic even as fighting continues.

However, rebel attacks — which have increasingly involved suicide bombings targeting civilians — have undercut the Kremlin's effort to portray the situation in the war-shattered region as stabilizing.

In June, a female bomber blew up a bus carrying workers from a Russian air base near Chechnya, killing herself and at least 14 people. Suicide attacks in May killed 74 people along with four bombers.

During the Moscow theater standoff in October, Chechen militants threatened to blow themselves up and held 800 people hostage for days. Russian special forces ended the standoff by pumping narcotic gas into the theater and then storming in. At least 129 hostages died, almost all from the effects of the gas.