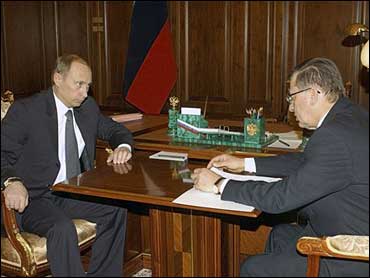 Russian President Vladimir Putin dismissed his long-serving prime minister on Wednesday and nominated Cabinet official Victor Zubkov to replace him in a surprise move that could put Zubkov in the running to replace Putin next year.

The nomination of Zubkov, who currently oversees the government's fight against money laundering, appeared to have caught much of the Russian political elite off-guard.

Putin had been expected to announce in December whom he would back to run for president next year - and Russia's two first deputy prime ministers - former Defense Minister Sergei Ivanov and gas giant Gazprom board chairman Dmitry Medvedev - are widely considered to be the leading contenders.

After dismissing Prime Minister Mikhail Fradkov - triggering the government's automatic dissolution - Putin explained the shakeup was required to "prepare the country" for forthcoming elections. Legislative elections are to be held on Dec. 2, and presidential elections are expected three months later.

He said the lower house of parliament, the State Duma, could vote on the nomination as early as Friday.

Zubkov's position in the Cabinet was relatively obscure; the Financial Monitoring Service he headed is an arm of the Finance Ministry that investigated money laundering.

Zubkov also served under Putin when the two worked in the city administration of St. Petersburg in the early 1990s. Putin has regularly tapped former colleagues from St. Petersburg to head top posts in the government.

Putin is wildly popular among Russians, having brought stability and relative prosperity to the country after the often chaotic presidency of his predecessor, Boris Yeltsin. As a result, whoever is nominated for the presidency by Putin is expected to win easily.