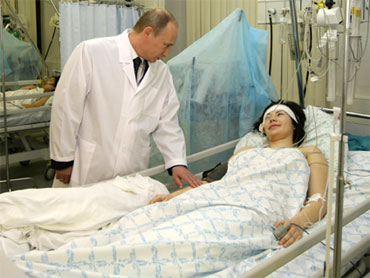 Vladimir Putin vowed Tuesday to "drag out of the sewer" the masterminds of the twin suicide bombing of the Moscow subway system that killed 39 people and left scores wounded.

The powerful prime minister spoke as Russia mourned the dead from Monday's attacks; teary passengers lit candles and left carnations at both of the central stations that were hit.

The blasts shocked a country that had grown accustomed to such violence being confined to a restive southern corner - and marked the return of terrorism to the everyday lives of Muscovites after a six-year break.

As senior politicians call for the return of the death penalty, the attacks have raised fears that civil liberties may again be sacrificed under the pretext of fighting terrorism - a charge Putin faced during his eight-year presidency.

"I understand what authorities will do. They will resume persecution of opposition, there will be more censorship, political spying. There will be more riot police dispersing opposition rallies and protests. But it will not save us from terrorism," prominent opposition leader Boris Nemtsov said in an editorial published by Grani.ru online magazine.

As president, Putin consolidated control in the wake of the 2004 Beslan school hostage crisis by abolishing the election of regional governors, and came to power in 1999 promising a strong crackdown on rebels in Russia's North Caucasus.

Putin said on television Tuesday that he is sure the organizers of Monday's attacks by two women will be found.

"We know that they are lying low, but it is already a matter of the pride of law enforcement agencies to drag them out of the sewer and into broad daylight."

CBS News' David Grout reports that Russian authorities released photos of the alleged bombers to the public, but the two women had not yet been identified.

Many have speculated that the blasts - blamed on Muslim extremists in the Caucasus region, which includes Chechnya - were retaliation for the recent killing of separatist leaders in the area by Russian police. No claims of responsibility have been made.

CBS News correspondent Mark Phillips reports that the two female bombers are suspected to have been "Black Widows," a group which began as the bereaved wives of Chechen men killed by Russian troops during the two wars fought over the region.

The city remained on edge Tuesday, even as people began to commute on the subway again.

"I feel the tension on the metro. Nobody's smiling or laughing," said university student Alina Tsaritova, not far from the Lubyanka station, one of the targets.

The female suicide bombers detonated belts of explosives during the morning rush-hour at the stations, investigators said.

Some commuters said Tuesday they would try and block the events out of their mind completely.

"We have to live with this, not to think about it, especially when we're underground," said Tatyana Yerofeyeva, a Muscovite in her early 50s.

As public outrage swells, the upper house of parliament is proposing bringing back the death penalty for such crimes, a lawmaker was quoted as saying.

(CBS)
President Dmitry Medvedev called on chairmen from the Supreme Court and the High Court of Arbitration to propose ways to "perfect" terrorism laws.

"It's the same old answers that we have heard before about smashing terrorists, eliminating them, leaving no-one unpunished," Jonathan Eyal, an analyst at Britain's Royal United Services Institute, told Phillips. "Arguments that are kind of understandable in the level of frustration at the moment, but do nothing in the long term."

Russia announced a moratorium on capital punishment when it joined the Council of Europe in 1996 and pledged to abolish it, but has not done so. The Kremlin-controlled parliament has been reluctant to fully outlaw executions, due to broad public support for the death penalty.

As Moscow mourned, plastic plaques hung in the two metro stations above rickety tables overflowing with flowers; their inscriptions promised permanent replacements. Some people were choked by tears as they laid candles.

Flags flew at half staff on government buildings, at the Kremlin, and in other cities across the vast country. Entertainment events and television shows were canceled, and services were scheduled at several churches.

Monday's first explosion took place just before 8 a.m. at the Lubyanka station in central Moscow, beneath the notorious headquarters of the Federal Security Service or FSB, the KGB's main successor agency. The FSB is a symbol of power under Putin, a former KGB officer who headed the agency before his election as president in 2000.

The last confirmed terrorist attack in Moscow was in August 2004, when a suicide bomber blew herself up outside a subway station, killing 10 people. Chechen rebels claimed responsibility.