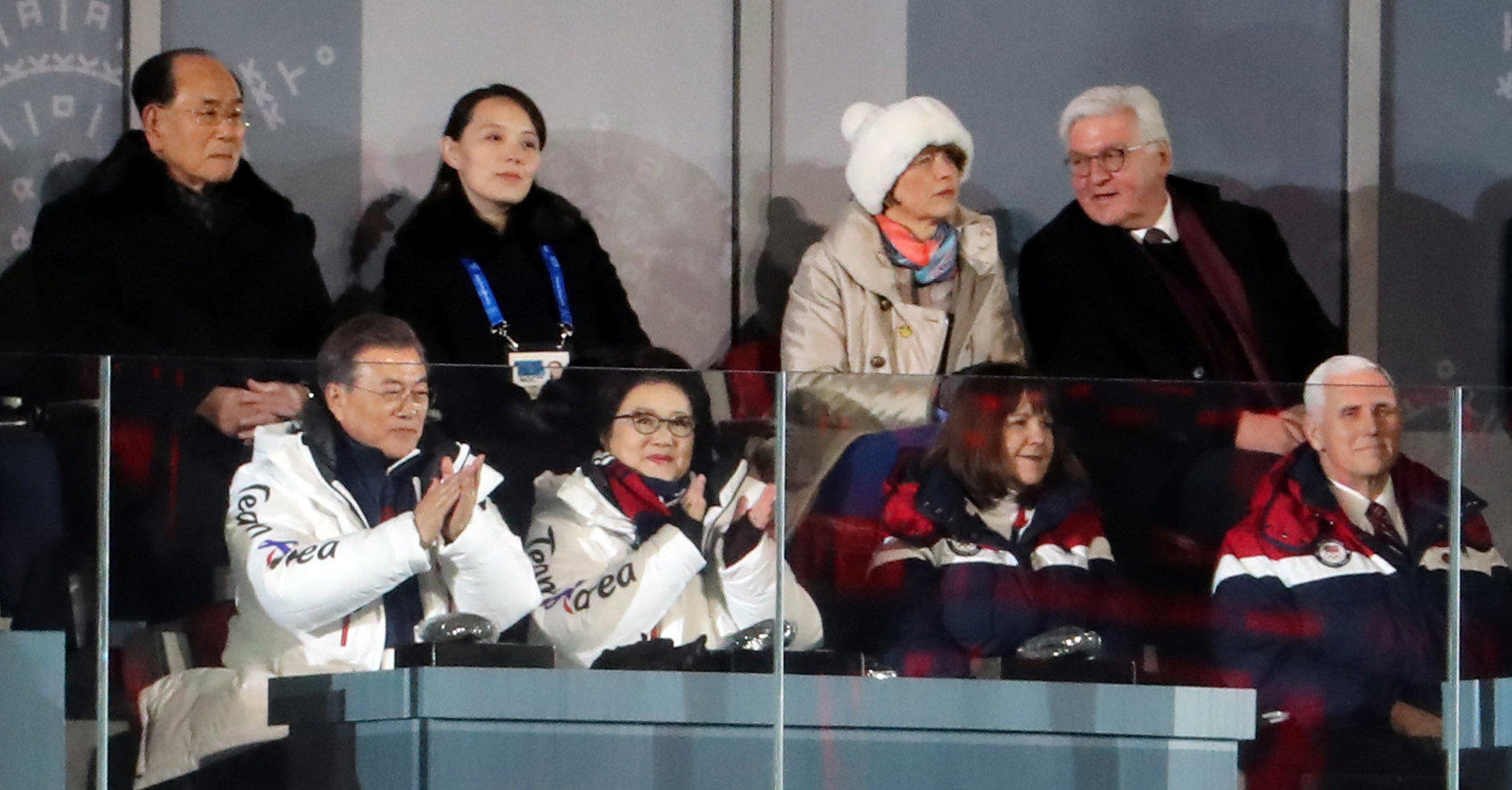 The dictator's sister, Kim Yo Jong, and the country's 90-year-old nominal head of state, Kim Yong Nam, were seated a row behind.

The White House official, who spoke on the condition of anonymity, said Pence stood only for the U.S. team, despite other people in the box standing and applauding when athletes from the two Koreas walked in together. The games are taking place amid an international standoff over North Korea's nuclear weapons.

Kim Yo Jong, who is probably Kim's closest confidant and is a senior cadre in North Korea's ruling party, is the first member of the Kim dynasty to visit South Korea, though her grandfather, Kim Il Sung, traveled to areas occupied by his troops south of what is now the Demilitarized Zone during the 1950-53 Korean War.

The trip has the potential to become something of a coming out party -- certainly for Kim Yo Jong, but also for her deeply isolated country. CBS News correspondent Ben Tracy says her influence in the regime is so significant, South Korean media call her the North's Ivanka Trump. Her presence is the latest move in an extraordinary show of Olympic diplomacy with Seoul that could prove to be a major challenge to the Trump administration's hard-line Korea policies.

And as Tracy reported earlier this week, the first member of North Korea's ruling family to cross the border, Kim Yo Jong was never guaranteed a warm welcome from all South Koreans.

Protesters have gathered this week to greet members of the North's Olympic delegation, which includes more than 500 people in addition to Kim's sister. The South Korean demonstrators told CBS News they were angry that Kim's regime had been allowed to participate in the Olympics, and appeared to be stealing the spotlight from the host country.

Kim Jong Un hasn't set foot outside North Korea or met a single head of state since he assumed power upon the death of their father, Kim Jong Il, in late 2011. His single-minded pursuit of a nuclear arsenal to counter what he sees as the threat of invasion by the United States has ratcheted up tensions not only with his rivals but also with primary trading partner China and with Russia, once a key benefactor.

The arrival was broadcast live on South Korean television. Looking confident and relaxed, she had a brief meeting with South Korean officials, including Unification Minister Cho Myoung-gyon, before being whisked away in a black limousine and catching the high-speed train to Pyeongchang.

Kim Yo Jong, who is believed to be about 30, has been rapidly rising within the North's power structure and is believed to be in charge of shaping her brother's public persona. But she has generally remained safely cloaked in her brother's shadow. This is her first high-profile international appearance at center stage, though she is technically just a member of a delegation headed by the North's aging senior statesman, 90-year-old Kim Yong Nam.

As the opening ceremony began, she and South Korean President Moon Jae-in exchanged a historic handshake and spoke briefly. They smiled broadly, though it was not immediately known what they said.

At the age of 30, Kim Yo Jong is quite possibly the most powerful woman in North Korea. Just a few years younger than her brother, she is believed to be his closest confidant and is a senior cadre in North Korea's ruling party. Her arrival on Kim Jong Un's private jet with a coterie of 22 officials was broadcast live on South Korean television.

Looking confident and relaxed, she had a brief meeting at the airport with South Korean officials, including Unification Minister Cho Myoung-gyon, before being whisked away in a black limousine and catching the high-speed train to the mountains of Pyeongchang. As a sign of her status, the elder Kim Yong Nam offered her the seat of honor at the airport meeting, but she politely declined.

The trip comes amid a flurry of activity following Kim Jong Un's surprise proposal on New Year's Day to send a delegation of athletes, officials, entertainers and cheering groups to the Olympics.

The two Koreas, which remain technically at war, have cycled through countless periods of chill and thaw since their division 70 years ago. North Korea boycotted the 1988 Summer Olympics in Seoul and blew up a South Korean commercial airliner the year before. The past year has been particularly acrimonious as the North has accelerated its nuclear weapons development and test launches of missiles that are now believed to be able to reach most or all of the United States, South Korea's most important ally.

The delegation's most substantive event may come outside of the Olympic ambit on Saturday.

Along with the rest of the North's senior delegation, Kim is to have lunch with South Korean President Moon Jae-in at the presidential Blue House. The meeting could turn out to be just a lunch, a photo op or a nicety. But it is so unprecedented, and its announcement on Thursday was so sudden, that rumors are already swirling it could open the door to much more - perhaps even an offer for Moon to travel to Pyongyang.

The North and South held summits in Pyongyang in 2000 and 2007, both hosted by Kim Jong Il.

Caution is in order here: Considering the depth and complexity of the very real problems that keep the Koreas apart, it's highly unlikely a luncheon would lead to an immediate breakthrough on something like the North's nuclear weapons development. Vice President Mike Pence is also here to attend the opening ceremony for the United States, and he has publicly and repeatedly warned South Korea not to let down its guard to a North Korean charm offensive.

Even so, just holding such a meeting seemed unimaginable only a few months ago.

During the rest of her stay, Kim will have ample opportunity to play up the feel-good side of her country's participation in the games.

The first hockey match featuring the joint North-South women's ice hockey will also be held on Saturday - they play Switzerland - and that would be an event she might want to see. The North has also sent a several-hundred women strong cheering squad, an orchestra with singers and dancers and a demonstration taekwondo martial arts team that will perform in Seoul and places near the Olympic venues.

If her schedule permits, Kim might be able to take in a musical performance by her compatriots in Seoul on Sunday.

Security for anything involving the North Koreans has been exceptionally tight.

A small but persistent group of right-wing protesters have shown up at several venues to burn North Korean flags and tear up portraits of Kim's brother. The group is fringe, but their demonstrations have generated irate reactions in North Korea's state-run media and could potentially spin out into a major incident if they ever manage to get closer to the North Koreans themselves - or especially Kim and her entourage.

So far, police have kept the two at a safe distance.