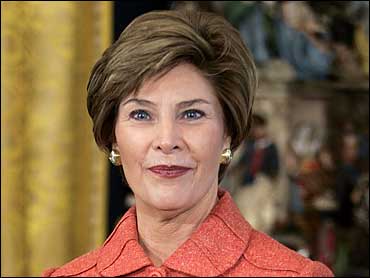 Q: Mrs. Bush, thank you, always, so very much for agreeing to do this. As you know, my story is about the forthcoming 100th visit by the President to Camp David. Were you surprised that you have been there that often?

MRS. BUSH: Well, I guess not, I mean, I don't think of it as that often. But we go several times a year at least. But we love to go there. It's a great place to go on the weekends where we can actually be outside. We can walk outside, and we can also be with family and friends. And the President has used Camp David to host a lot of heads of state. We've had, I think, eight heads of state. Tony Blair has been to Camp David with the President three different times.

And so it's an informal time for us to get to be with Cabinet members, for instance. We've asked all of our Cabinet members at different times, or heads of state or other staff members or family. It's a nice way to get to visit with people and, at the same time, work on whatever the issues are.

Q: To what extent would you say that the visits there are a respite from the daily grind here at the White House?

MRS. BUSH: They are a respite, certainly, because we can be outside, we can go for walks outside. It gives us a chance to have meals with staff members or family members or friends. That really gives us a chance to have a different type of visit with people, certainly the heads of state who have come. It's an informal time, a relaxed time. The Camp David cooks are Navy Mess. It's a Navy installation. And they're great at fried chicken and a lot of other foods that we all like. And so we can have sort of an American weekend in a beautiful setting with great American foods for heads of state.

Q: Now, we've seen practically all the rooms here in the White House, but we haven't seen the cabins at Camp David. Can you tell me a little bit about the accommodations?

MRS. BUSH: Well, there are a lot of little cabins. Some of them date back to Roosevelt, Franklin Roosevelt, when Camp David was built. It was really installed during the war when they wanted the President to have a safe place to go to out of Washington. At the time, there was a presidential yacht, which is why Camp David ended up being a Navy installation, because the staff from the yacht would go with Roosevelt when he went to Camp David. And he named it Shangri-La. And then when Eisenhower was there, Eisenhower thought that the Presidents could rename Camp David every time. And so he named it for his grandson, David Eisenhower, Camp David. But of course, that name has stuck.

Q: You haven't thought of changing the name, have you?

MRS. BUSH: Marvin Bush, George's brother, thought we should name it Camp Marvin, but I don't think we will.

Q: Or Prairie Chapel Two. (Laughter.) What can you do at Camp David that you're not able to do here?

MRS. BUSH: Well, we can be outside. That's a great part. We can walk outside. It's really quite beautiful, and there's a very nice and aerobic walk, about a two-mile walk that goes up a big hill and so we like that. There's a little putting green on the back lawn of the cabin that we use that was put in by Eisenhower, who loved to play golf, as you know. And there's a swimming pool that I think President Ford installed. He loved to swim for exercise.

So there are a lot of ways to be outside and to exercise. And we have a chance, because there's a bowling alley there, as well, to play games with--like bowling--with our guests who have come to visit. And when it's a Cabinet member, for instance, it gives us a great chance to get to know the other Cabinet members and their spouses in an informal way.

Q: What do you think people would be surprised to learn about Camp David?

MRS. BUSH: Well, I think they'd be surprised to know how rustic it is. They're rustic little cabins, they're very charming, but they're simple. And then there's a lodge, one big cabin where we go for all of our meals. So we meet everyone at the lodge for meals. There's a beautiful little chapel that was started -- the fundraising for the chapel was started during President Reagan's term, but it was actually inaugurated and open during President Bush number 41, as we call him, his term in office. And so we go to church there on Sunday mornings with the troops who are stationed there. And we've really gotten to know them over the time that they're stationed there and that we've been going. We know their children.

One of the funniest and happiest events is the Christmas pageant every year, where we see the little tiny children. One year we had the fight between the little shepherd brothers that everyone found very amusing. Or we see the dad hold the little wise man up in front of his face, the little baby, wearing the little crown of the wise man, and the dad is saying the words of the wise man from behind him.

It's a very, very happy family time with the troops that are stationed there.

MRS. BUSH: Well, we'll spend Christmas there with all of our family -- President Bush and Barbara Bush; my mother; our girls, of course; George's brothers and sister and their families; their children. I think there will be about 30 of us. It's a very big family. And because Camp David has these little cabins, each family can have their own little cabin; they can have their own Christmas tree when they wake up in the morning. And then, of course, we'll meet for Christmas dinner on Christmas day. We'll go to church together on Christmas morning. They'll be with us for the famous Christmas pageant on one night, and then we'll have Christmas Eve services, as well.

Q: Mrs. Bush, you must have seen the story the other day on the cover of Newsweek that the President lives in a bubble. Would say that Camp David is part of the bubble, or would you disagree with the whole premise of the President living in a bubble?

MRS. BUSH: I disagree with the whole premise, absolutely. President Bush -- and I think people really know this -- likes people a lot and is with people a lot. He travels around the country a lot and sees people all over our country. But besides that, we have a number of friends, a lot of West Texas friends, who wouldn't let George be in a bubble, who come see us quite often or we get to see.

Q: But there's no question Camp David is remote, it's isolated, and you can't drive by there. There are no tourists peering through the fence.

MRS. BUSH: That's the point, obviously. It was built as a secure place for the President to go for a presidential retreat, and that's what it is.

Q: What are his favorite things to do there?

MRS. BUSH: Well, he loves to play golf, if his friends are there with him, on this putting green. There are a few approaches to the putting green in the backyard. It's obviously not really a golf course, but it's a great place to play. And Barney and Beazley, with their long snouts, retrieve the balls out of the holes. And so that's fun to do.

There's a bowling alley; we can bowl there. We love to go for long walks; that's really our favorite thing to do when we're at camp. It's really quite lovely there. Every season is beautiful there. In the fall, the leaves turn red. In the winter, it's covered with snow. In the spring, there are azaleas and dogwoods. And then, of course, the summer is a little bit cooler, which is one of the reasons it was chosen as a presidential retreat during Roosevelt. It gave him a cooler place to go in the summer. I think he went to Warm Springs, Georgia, in the winter, and Camp David was a little bit cooler than Washington.

Q: Do you know why the Navy runs this installation up in the Maryland mountains?

Q: Is there any Camp David story you have that I haven't asked you about?

MRS. BUSH: One very important weekend was the weekend after September 11th, when the whole Cabinet, everyone who would be involved in any way with what the response would be after September 11th, came to Camp David. And we spent the weekend there, all the spouses came. It was a weekend of high emotion, as you might guess, and anxiety, certainly. But also there was a lot of fellowship with being with each other. The Cabinet members and the President and the National Security Advisor met during the days. The spouses worked on puzzles together or went for walks. And then in the evening, when we joined each other for dinner in the lodge where we have dinner, the Attorney General, John Ashcroft, played -- or Condi actually played the piano and John Ashcroft sang, and everyone sang together.

So it was a time we'll never, ever forget. And that was the very same weekend that we went to chapel together on Sunday morning at Camp David, and it just happened that weekend that the liturgy was the verse, "and I believe I shall see the goodness in the land of the living." And I think that was really a reassuring scripture.

MRS. BUSH: Thanks, thanks a lot, Mark.