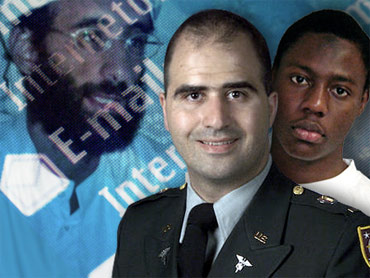 A Yemeni-American Muslim preacher known for his ties to extremists operating in the U.S. called on American Muslims in a new audio message to turn against their government because of its actions against Muslims around the world.

Anwar al-Awlaki's latest message, excerpts of which were aired on CNN Wednesday, described his own radicalization after U.S. operations against Muslims and called on those in the U.S. to follow his path.

"I eventually came to the conclusion that jihad against America is binding upon myself just as it is binding on every other Muslim," he said in his American-accented English.

SITE Intelligence Group, which monitors extremist Web Sites, confirmed the existence of the audio message when contacted by The Associated Press.

"To the Muslims in America I have this to say, how can your conscience allow you to live in peaceful coexistence with a nation responsible for the tyranny and crimes against your own brothers and sisters?" he asked. "How can you have loyalty to a government leading the war against Islam and Muslims?"

Al-Awlaki, a U.S. citizen born in New Mexico to Yemeni parents, has used his personal Web site to encourage Muslims around the world to kill U.S. troops in Iraq. Yemeni security officials say they believe he is hiding in a region of the mountainous nation that has become a refuge for Islamic militants.

He was in regular contact with Maj. Nidal Malik Hasan, who is accused of killing 13 people in a rampage at the Fort Hood Army post in Texas. The two had 10 to 20 e-mail exchanges over several months last year.

Al-Awlaki also is believed to have been in touch with Umar Farouk Abdulmutallab, a Nigerian who attempted to blow up a passenger airliner in Detroit on Christmas day with explosives concealed in his underwear.

"Our brother, Umar Farouk, has succeeded in breaking through the security systems that have cost the U.S. government alone over $40 billion since 9/11," he said in an unaired excerpt of the tape provided by SITE.

U.S. authorities have been increasingly worried about the presence of Americans supporting jihad inside the country. Over the past week, a Pennsylvania woman, who went by the name "Jihad Jane," was accused in a plot to kill a Swedish cartoonist; a New Jersey man was held by authorities in Yemen; and five young Pakistani-American men from Northern Virginia were charged by Pakistani officials with planning terrorist attacks in the South Asian country.

More than a dozen Americans have been captured or identified by the U.S. government and its allies as actively supporting jihad, or holy war, in the past two years.

Al-Awalki appears to be in a leadership role when it comes to directing terrorist operations and selecting targets for al Qaeda in the Arabian Peninsula, a law enforcement source told CBS News investigative producer Pat Milton. He had previously been viewed as a behind-the-scenes supporter, providing religious guidance and justification for attacks. He is now said to be an active operations player picking targets and suggesting schemes.

CBS News chief foreign affairs correspondent Lara Logan reports that al-Awlaki's U.S. citizenship - he was born in New Mexico - will have little bearing on American military and intelligence efforts to locate and kill him.

U.S. officials, both current and former, tell Logan that if an individual is deemed to be part of a terrorist network that is a threat to American security in any way, they can be targeted legitimately.

Al-Awlaki has for years posted messages online supporting violent Islamic extremism. A U.S. citizen himself, he has targeted his message, particularly in Internet postings, to the English-speaking audience.

On March 7, al Qaeda's American-born spokesman Adam Gadahn called on Muslims serving in the U.S. armed forces to emulate Hasan, whom he called a role model, and attack the military.