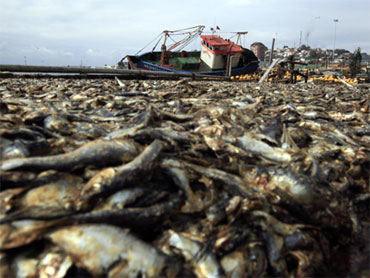 The tsunami that hit this coastal city sent 50-ton fishing boats crashing onto land and demolished its port - wiping out the $40 million in business that courses through the local economy from the annual anchovy and sardine catch.

Less than 100 miles away, Chile's economy took another beating as the mammoth quake downed bridges and opened up vast crevices on the nation's only north-south highway, paralyzing the export lifeline for the nation's renowned farm-raised salmon industry.

And Chile's telecommunications system was still so badly out of whack Tuesday - four days after the quake - that local and foreign investors who own vineyards that carpet the hardest-hit areas couldn't reach winery employees by phone or Internet to discuss the upcoming harvest.

"You have to get grapes from the vineyards to the winery, and I don't know the condition of the roads around the winery," said Mark Osmun, spokesman for California's Jackson Family Wines, owner of the Vina Calina winery in the devastated Talca region about 65 miles from the quake's epicenter.

More coverage of the earthquake in Chile

Chile's horrendously destructive 8.8-magnitude quake doesn't have a price tag on it yet, though President Michelle Bachelet mentioned a $30 billion estimate when she met Tuesday with U.S. Secretary of State Hillary Clinton, who delivered 25 satellite phones as a down payment on disaster assistance.

But the quake has already forced tens of thousands into unemployment with no end in sight in the nation's south-southwest area and will almost certainly mean higher salmon prices at U.S. supermarkets. It also translates into higher wine production costs for an industry already hurt by the declining value of the U.S. dollar.

Chile's copper industry, which supplies a third of the world's copper, wasn't badly affected because it lies north of Santiago.

Similarly, the large ships that fish Chile's rich waters far out to sea rode out the tsunami and can deliver their catches to ports unaffected by the earthquake.

But an estimated 1,000 boats that stick closer to shore were destroyed, said Gonzalo Olea, a spokesman for Chile's National Confederation of Small Fishermen. Some boats ended up miles inland.

The quake hit just as the three- to four-month fishing season was starting for 760 small-scale fishermen in Talacahuano, said Nelson Estrada, president of their union representing fishermen who now wander around with nothing to do, their jeans stained by black mud that the tsunami left behind.

"The season has been killed," Estrada said from the wrecked port reeking of putrid fish.

The region where they ply the waters nets 4 percent of the world's annual catch of seafood, some 2 million metric tons, said Hector Bacigalupo, general manager of Chile's National Fishing Association. At least 90 percent - including hake, mackerel and shellfish - goes to the United States, Australia and Africa.

Many fishermen also lost their homes, an eerie replay of Louisiana's shrimpers who were devastated by Hurricane Katrina and haven't fully recovered five years later.

Even Chilean fishermen whose boats survived intact may find it hard to work because it will take months or more to repair unloading piers and replace equipment that looters stole from fish-processing plants.

"Now the boats are paralyzed because there's no way to unload," said Carlos Rivas, a boat captain in Hualpen.

Some went out to sea anyway in the quake's aftermath, buoying their boats in bays after returning and rowing to shore to give their catch free to hungry survivors in a zone that is home to a large proportion of the earthquake's death toll.

Chile's salmon industry that raises fish in pens and competes heavily with Norway and Canada was spared from major damage because it lies hundreds of miles south of Talcahuano. But the sector's transportation chain was thrown into crisis when the tremor hit before dawn Saturday.

On maps, Chile looks like a slender chili pepper with the north-south Pan American Highway sandwiched between the Pacific Ocean and the Andes Mountains. Fresh salmon must be driven in refrigerated trucks for 900 kilometers along the now damaged road to the airport in Santiago to be loaded onto cargo planes flying to the U.S. and elsewhere.

Some Chilean salmon suppliers are trying to set up a trucking route to Buenos Aires, Argentina, said Kimberly Gorton, president of Boston-based seafood distributor Slade Gorton & Company Inc. But that route is twice as long, and trucks would have to navigate high mountain passes.

Still, no one knows how long it will take to repair all the damaged bridges and highway pavement on Chile's highway.

"Clearly what's going to happen is a reduction in supply is going to cause an increase in prices," Gorton said. "It's sad because Chile is so dependent on its fishing industry for exports."

Some of Chile's oldest and most famous wine-growing regions lie in the heart of area slammed by the earthquake.

Concha y Toro, Chile's biggest winemaker, announced a one-week shutdown of operations in the area to carry out thorough inspections.

Osmun, the Jackson Family Wines spokesman, said the only news he had from the Vina Calina winery came Sunday via text message: All employees and their relatives were OK, 2,000 liters of wine was lost when a barrel or bottles broke, and there was minor damage to the winery itself.

Chilean wine promoters are confident the industry will recover.

"The damage was not enough to ruin the possibilities of making wine," said Michael Cox, the British director for the Wines of Chile group that promotes 90 Chilean wineries. "If one winery can help another down the road crush grapes, chances are they will pull together."