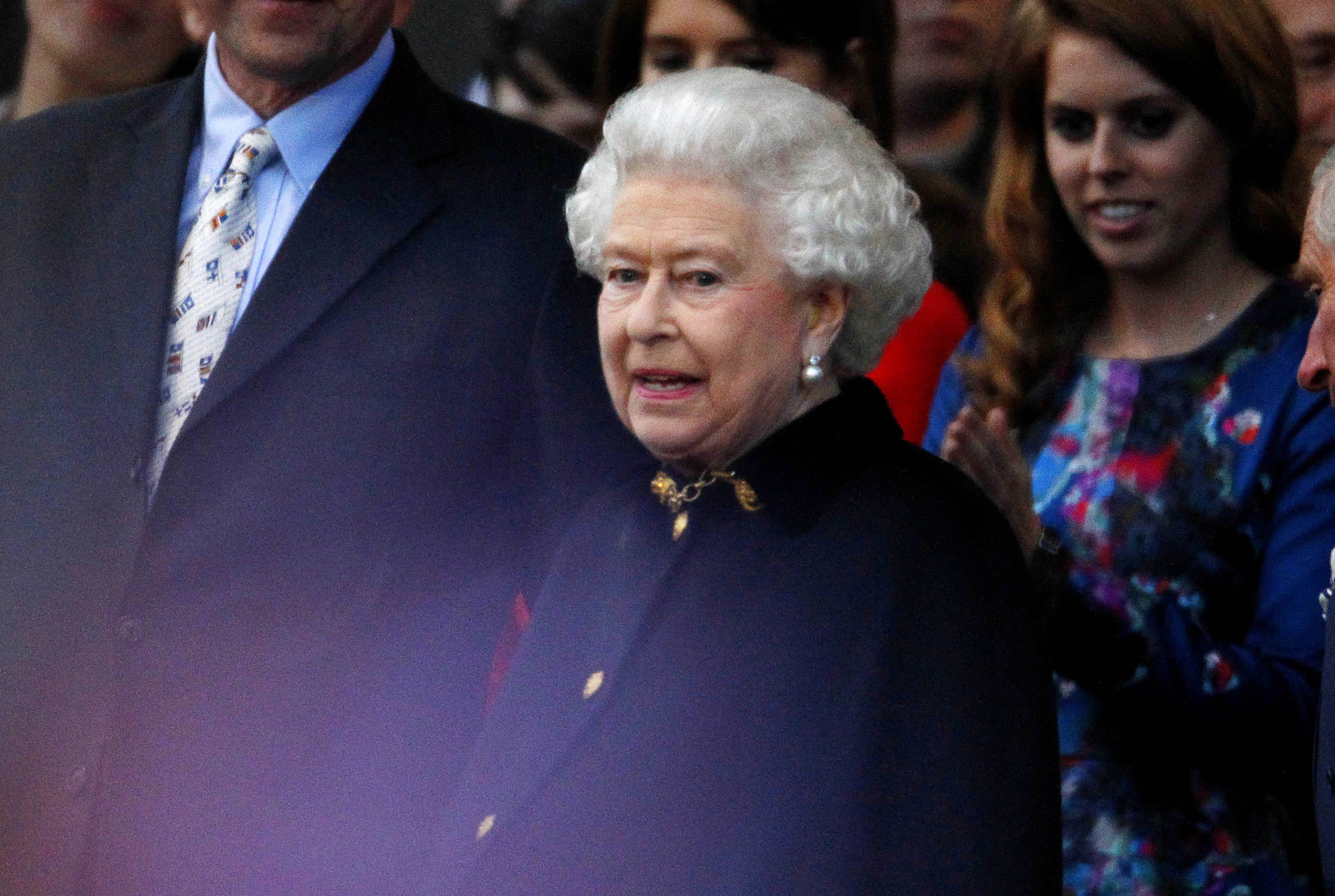 Some 12,000 contest winners sat in bleachers, while a huge crowd stretched down the Mall, the wide boulevard leading up to the palace.

Members of the royal family including Prince Charles, his wife Camilla, Duchess of Cornwall, Princes William and Harry, and Catherine, Duchess of Cambridge, sat alongside the queen in a royal box to watch the show, performed on a specially erected stage outside the palace.

The queen was cheered as she arrived partway through the show, wearing a gold cocktail dress under a dark cape.

The show opened in a blaze of sound and color, as the band of the Coldstream Guards joined Robbie Williams onstage for his hit "Let Me Entertain You."

Wearing a sparkly dress and angel wings, Annie Lennox performed "There Must Be An Angel." Sir Tom Jones, who sang "Delilah," described performing at the event as a "once-in-a-lifetime" opportunity. He told CBS News, "When you get a royal wedding or a Jubilee - and it brings people together, you see happiness on people's faces ... It's very exciting."

Prince Harry, meanwhile, could be seen singing along - "Why, why why?" - as Jones performed "Delilah."

Sir Cliff Richard sang a medley of hits, including his 1968 song, "Congratulations," and the crowd cheered as Shirley Bassey sang "Diamonds are Forever."

Concertgoers were treated to a performance by Australian singer Kylie Minogue, who was joined by dance group, Flawless.

Stevie Wonder did a couple of his hits, including "Superstition" and "Isn't She Lovely," even changing the lyrics to include the "Queen's Diamond Jubilee."

English ska/pop band Madness performed "Our House" and "It Must Be Love" on the roof of Buckingham Palace.

Sir Paul McCartney closed out the show with "Magical Mystery Tour," "All My Loving," "Let it Be" and "Live and Let Die."

Prince Harry could be seen dancing along to McCartney's "All My Loving."

McCartney told the crowd the queen requested everyone leave "in an orderly fashion" after the show ended. He was then joined by the evening's performers for "Oh bla di Oh blah da."

The queen took the stage stage at the end of the show to huge applause, but didn't speak.

Instead her son, Prince Charles, said, "Your majesty, Mommy ... I'm sure you'd want me to thank on your behalf all of the wonderful people who made the night possible."

He added, "Thank God the weather turned out fine," referring to Sunday's rain.

Charles then addressed earlier news that his father, the queen's husband Prince Philip, missed the concert after being hospitalized with a bladder infection.

"The only sad thing about this evening is that my father couldn't be here with us because unfortunately he's been taken unwell," Charles said. "If we shout loud enough, he might just hear us in the hospital."

Palace officials said the prince, who will turn 91 on Saturday, was taken to a London hospital on Monday as a precaution and will remain under observation for a few days.