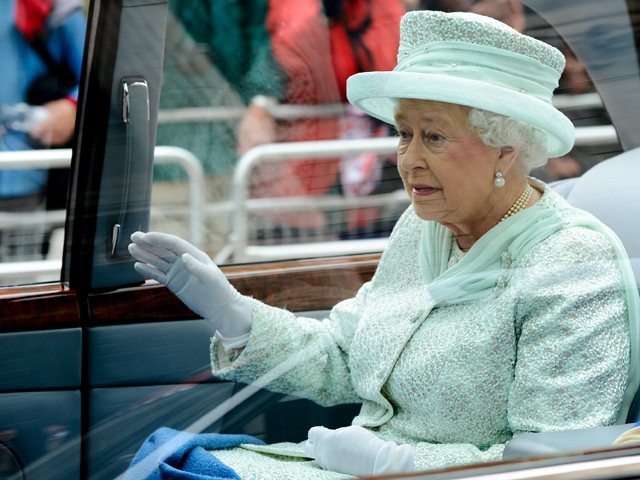 (CBS/AP) Britain's Queen Elizabeth II will close the Diamond Jubilee celebrations with a rare address to the nation.

On Tuesday, she arrived for a service at St. Paul's Cathedral on the last of four days of celebrations honoring her 60 years on the throne.

Attired in an outfit of fine silk tulle, embroidered with tiny mint green star-shaped flowers embellished with silver thread, the queen was a small, elegant figure, rarely smiling and often solemn as she followed the service.

As she left the cathedral, the queen paused near a tablet commemorating the Diamond Jubilee service of Queen Victoria in 1897.

The queen had lunch at Westminster Hall before joining a carriage procession to Buckingham Palace where she and her family could greet well-wishers from a balcony.

London's streets were lined with thousands of people as the queen and other senior members of the royal family traveled in a formal carriage procession. Three carriages left New Palace Yard on their way to the Center Gates at Buckingham Palace.

Upon her arrival, the queen waved from the balcony of Buckingham Palace as well-wishers chanted "God save the queen."

She was joined by Prince Charles, Camilla, Duchess of Cornwall, Kate, Duchess of Cambridge, Prince William and Prince Harry.

Planes flew overhead as the royals looked on and the crowd cheered. The queen smiled as she waved goodbye, while well-wishers held flags and chanted in the rain.

Poignantly, the queen was without Prince Philip, her husband of 64 years, who was hospitalized on Monday for treatment of a bladder infection.

The queen closed out the Diamond Jubilee celebrations with a rare address to the nation. The two-minute speech was recorded on Monday.

In her video message, the queen called the Diamond Jubilee events a "humbling experience."

Other than the annual Christmas Day broadcasts, the 86-year-old monarch has rarely spoken directly to the nation.