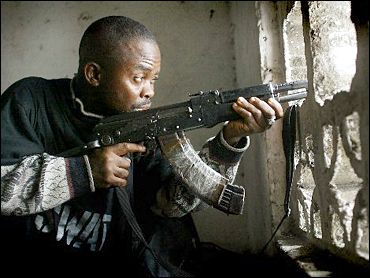 With the new hopes of rescue, people in Liberia's capital passed one of the quietest nights in the last two months of rebel offensives. Gunfire rattled, but there was relief from the rocket and mortar volleys of recent days.

The advance team of West African and U.S. officials, which is led by a Nigerian commander, set off jubilant celebrations in Monrovia as it passed shacks with tin roofs peeled back by explosives and undetonated shells in the streets.

"This is a sign of peace coming," refugee Hamilton Woods said with a smile.

As the advance team arrived at the high-walled, heavily guarded U.S. Embassy, hundreds of refugees taking shelter around the compound spilled out, fluttering handkerchiefs and flashing peace signs while shouting with joy.

"We are hungry, but seeing these people we are full this morning," businessman Mohammed Dauda, 31, said. "We hope this marks the beginning of the end."

Liberia's leading rebel group has pressed since early June to take the capital and drive out President Charles Taylor, a former warlord whose battles to win and maintain power have mired the country in 14 years of conflict. Taylor repeatedly has promised to step down once international peacekeepers arrive.

More than 1,000 civilians have died in the ongoing siege, aid groups say, with battles being fought in densely populated neighborhoods. Fighting has cut off the main water plant and the port, which contains aid and commercial warehouses, leaving more than 1.3 million residents and refugees desperately short of food and water and plagued by disease.

West African leaders have pledged a peace force since soon after the siege started in June. Nigeria, the region's military power, pledged to send two battalions totaling 1,500 men as a vanguard force but first it wants help paying the costs, estimated at $2 million a day.

U.N. Secretary-General Kofi Annan pressed the West African leaders Wednesday to commit to a deployment date. Nigeria President Olusegun Obasanjo arrived in Accra, Ghana, on Thursday for talks with the presidents of Ghana and Togo on "how to fast-forward the Liberian peace process, particularly the deployment of troops," Ghana Foreign Ministry official George Abotey said.

The summit came as three U.S. warships steamed toward Liberia carrying what President Bush said could be limited support for a joint West African-U.N. peace force. The ships were about one or two days away from reaching Liberia.

The United States, which oversaw Liberia's 19th century founding by freed American slaves, has promised $10 million in logistical support for the West African mission. Bush has made the deployment of troops contingent on Taylor stepping down and a cease-fire being in place.

The United States on Wednesday asked the United Nations to authorize a multinational force for Liberia, followed by a U.N. deployment by Oct. 1.

The advance inspection team, led by Nigerian Brig. Gen. Festus Okonkwo, was meeting government ministers and U.S. officials Thursday in the battered capital. Some of the basic tasks scheduled for the next two days include determining where the peace force will live and how much fuel is available for it.

Any initial deployment would be limited to the capital, authorities said.

Liberia's second, smaller rebel group, the Movement for Democracy in Liberia, declared Thursday that peacekeepers were welcome in its area — joining Liberia's government and the leading insurgent group, Liberians United for Reconciliation and Democracy, in insisting the foreign deployment would be greeted warmly.

"We are very elated to have the first wave," Liberian Defense Minister Daniel Chea said at the southeastern port of Buchanan, where his forces were pressing a three-day attempt to retake the city, which was captured by rebels Monday.

"We see it as a very, very good thing," Chea said. "Their arrival here is long overdue."

Chea claimed heavy battles in Buchanan on Thursday while rebels said the city was quiet and in their control.