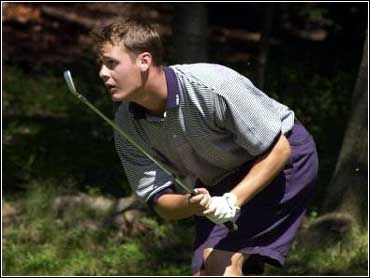 Jeff Quinney spent a sleepless Sunday night after blowing a three-hole lead with as many to play and seeing the championship match of the U.S. Amateur suspended by weather after 38 holes.

One hole on Monday fixed everything.

Quinney sank a lightning-quick 35-foot putt on the 39th hole to beat James Driscoll and capture the 100th Amateur and everything that goes with it, exemptions for the U.S. Open and British Open and an invitation to the Masters, all next year.

As the ball neared the hole on line, the 21-year-old Arizona State senior started walking after it with his arms out ready to celebrate like Tiger Woods did on the first playoff hole of the recent PGA Championship.

When the ball rolled in, Quinney of Eugene, Ore., extended his arms up and quickly hugged his caddie, Tyler Pendergast.

Driscoll, who seemingly gained the momentum with his great comeback in the final three holes of the scheduled 36-hole match, was in trouble right from the start. The recent Virginia graduate hit his 5-iron on the par-3, 193-yard 3rd hole on the Upper Course at Baltusrol Golf Club into the deep rough on the right side of the green. He chipped out 20 feet past the hole, but Quinney ended the match by sinking his birdie putt.

Even though he lost, Driscoll, a quarterfinalist in this event last year, always will have his comeback to remember.

After being let down by his putter all day, Driscoll of Brookline, Mass., made two great putts on the 35th and 36th holes to temporarily deny Quinney the title.

Rooted on by his mother, father, five brothers, a sister and about 60 friends, Driscoll made a sliding 8-footer for birdie at the 17th and a 5-footer for par at 18 to win the holes and send the match to extra holes.

The 22-year-old Driscoll said he never focused on all his near misses there were about seven from six feet or less knowing one more would give Quinney the championship.

"Part of me might have been thinking deep down that I was due to hole a putt, but as soon as you say that, you're not going to make the putt," Driscoll said. "You have to go through the same routine and hope it works out."

The comebacks in the Amateur were worthy of Woods.

The 39 holes tied the U.S. Amateur record for the longest title match. Sam Urzetta beat Frank Stranahan in 39 holes in 1950.

However, going extra holes was the last thing anyone expected after Quinney made a 2-footer for par at the par-3 15th to stay 3-up with three to play.

A bad drive and chip cost Quinney No. 16, and Driscoll won the last two holes.

Driscoll actually hit two great shots at the par-5 17th, coming out of a bunker from 50 yards to about 8 feet and making the birdie. Quinney had already been conceded a pr.

For a split second, it appeared Driscoll lost the championship at the 18th when he blocked his drive right into trees with the ball coming to rest against a pine cone.

However, Quinney's drive hit a tree limb and came to rest on the edge of the fairway about 300 yards from the hole. Both reached the green in three and Driscoll tied the match by making a 5-foot par putt with the ball doing a 360 around the hole before falling in.

"I couldn't believe it went in," said Driscoll, who howled after the putt fell. "It caught the right edge and snuck in."

Quinney nearly ended the match on the 37th hole when his hot shot out of a greenside bunker hit the pin and stopped inches from the cup.

"He was up tight, pretty much a gimme putt," Quinney said. "I knew I had to get up and down. It was a tough shot though, one you probably get up and down five of 10 times. But it came out nicely. I thought it was going in the hole."

The players showed a lot of sportsmanship at the 38th hole, conceding short putts so neither would lose on a shot like that.

The threat of lightning forced a 40-minute suspension earlier in the round and when the threat returned around 7:14 p.m., play was suspended until Monday.

Quinney held the lead from the first hole of the morning round until being tied at the 36th hole, in large part because Driscoll missed seven putts from 8 feet or less, including six from 5 feet or less.