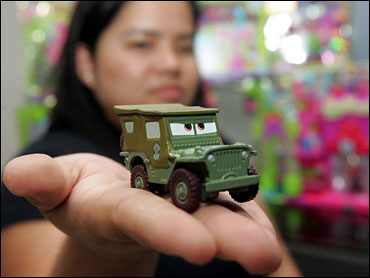 This column was written by Michelle Cottle.

Both my kids' birthdays are this month, and let me just say that the recent toy recalls from Mattel have certainly added a frisson of excitement to the whole business of shopping for presents. For Alexandra, should I go with the lead-paint coated Dora's Talking Pony Place or the Polly Pocket doll, featuring tiny, powerful magnets that tend to break off and, if ingested, could choke her or perforate her intestines? As for Tom, I'm torn between the lead-decorated figurine based on the Sarge character from the movie Cars or the deadly-magnet-adorned Batman action set. Decisions. Decisions. What is a caring, responsible parent to do?

Undoubtedly, a tiny fraction of ultra-anxious parents are at this very moment purging their homes of all foreign-made playthings and vowing to henceforth only buy American. But thus far, I've been surprised at how non-exercised people seem to be about the recalls. Sure, there have been plenty of news stories about them, but nothing along the lines of what I'd expected. Ordinarily, any time the teensiest shadow of a threat falls across America's children, the nation responds with a collective freak-out that immediately sends the Web into hyperdrive and cable news into 24-7 saturation coverage. (A pretty blonde preteen has been snatched in California! Quick! Bolt your doors and don't let your kids outside without a GPS anklet! A disgruntled loner has shot up his high school with a rifle! Ack! Put an end to all bullying before this happens in your town!) But as far as I can tell, in the wake of Mattel's announcement this week, the cable fear-mongers remain far more entranced with the approach of the 2007 hurricane season than with any looming toy menace.

Politicians too have been strikingly low-key (though possibly because all of Washington is on vacation this month). Democratic Senators Dick Durbin and Bill Nelson have introduced legislation to require third-party inspections of foreign made toys, but so far no one has taken much notice of their effort. Hillary Clinton, meanwhile, has done little more than take a swipe at President Bush for allowing the Consumer Product Safety Commission to remain without a chairman for the past year.

On one level, this restraint seems like a good thing. After all, China isn't the only country with safety issues — let's not forget that last year's E. coli spinach scare was entirely homegrown. And it would be all too easy to let a handful of unfortunate screw ups spark an ugly wave of Sino-phobia, particularly among segments of the populace already understandably bitter about the wholesale outsourcing of manufacturing jobs.

At the same time, I worry that this relative calm isn't a product not of folks' having rationally weighed the risks so much as of their having written the problem off as part of some whole big globalization dilemma that is simply too complex and overwhelming to confront. A recent Zogby poll indicated that two-thirds of Americans say they'd entertain the notion of boycotting Chinese goods until improved safety standards were enacted. But, with an estimated 80 percent of all U.S. toys made in China — along with more than 80 percent of the world's Vitamin C, 70 percent of its penicillin, more than 40 percent of the U.S.'s apple juice... — what's a boycott-minded consumer supposed to do? The smart money says Mattel isn't any more slipshod in its product oversight than any other manufacturer. So unless parents and grandparents are prepared to pretty much stop buying toys, there don't appear to be many prophylactic steps available to individuals.

There are, however, concrete measures that the U.S. government and business can take. While I'm sure Chinese safety inspectors are deeply committed to their public duty, the whole concept of safety regulation is still relatively new to that country. As a member of China's food and drug agency disturbingly informed The Washington Post last month in reference to a different scandal, "As a developing country, China's food and drug safety supervision work began late and its foundations are weak...Therefore, the food and drug situation is not something we can be optimistic about." (Ah, doesn't that just make you want to rush right out and buy some Chinese catfish?) Moreover, while I'm not up on the finer points of regulation within the Chinese toy industry specifically, I do know that in other industries, like vitamin manufacturing, inspectors are employed by the local government, which often owns a chunk of the companies being inspected. This doesn't exactly lend itself to clear-eyed, unbiased oversight.

With this in mind, American manufacturers like Mattel absolutely should be pressured to take more responsibility for their suppliers' actions. Third-party inspections are one possibility. But Durbin and Company should also demand more consistent monitoring from the companies themselves. I know, I know. Assigning full-time inspectors to keep an eye on Chinese plants would cost money and quite possibly offend their Chinese business partners. But my guess is that most parents would applaud such a move, even if it meant paying 10-cents more for a Tickle Me Elmo that didn't rot our kids brains. And while it's impossible to eliminate bad actors altogether in a system ruled so completely by cost-consciousness, we're not shooting for perfection here. We just need to improve the odds that the next infant teething ring we buy isn't filled with recycled antifreeze.

The public doesn't need to panic over toxic toys, but we do need to get brassed off enough to send a message to Corporate America and their overseas suppliers — not to mention the folks up on Capitol Hill who so clearly need to start making a few more demands and cracking a few more skulls in the interest of public safety. So forget about tossing out those dangerous Barbies, Big Birds, Doras, Diegos et al with the trash. Instead, rip their little heads off, pack them up, and ship 'em to your congressional rep. Think of it as both a protest and a public service: Nothing says "We're watching you" like a boxful of decapitated dolls.
By Michelle Cottle
If you like this article, go to www.tnr.com, which breaks down today's top stories and offers nearly 100 years of news, opinion and analysis