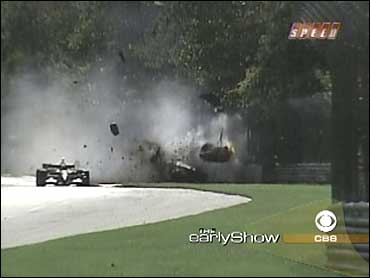 Katherine Legge defied death Sunday after the rookie race car driver crashed into the back corner of the track with six laps to go in the Champ Car Grand Prix of Road America in Wisconsin.

A possible rear wing failure pitched her off the track and into a series of somersaults, robbing her of a potential career-best finish.

"All I knew was I was coming around the kink on the back straight, doing about 165 miles an hour," she told The Early Show co-anchor Hannah Storm. "All of a sudden, the car just kind of speeded up. It was like I had a rocket ship behind me. And before I had time to really work out what was happening, I was like, 'What would have caused that?' The car just flopped ... and sent me into the barrier. At that stage I was thinking, 'This isn't good.' "

Throughout most of the crash, Legge said she had her eyes closed, but she was conscious during it. The race was stopped for about an hour, but Legge walked away with hardly a scratch. Nothing is left of her car.

"It's a testament as to how strong the PKV car is," she said. "The safety and medical team do such a fantastic job. That's why I'm here. I've got all of my bits and pieces in the right place at the moment."

Legge, 26, was driving her PKV car for the Warriors in Pink breast cancer awareness campaign and painted her car pink for the occasion to show her support of the Susan G. Komen Breast Cancer Foundation.

She said she thinks her survival proves that race car driving is equally as safe and dangerous for women as it is for men; she said she is just like any other race car driver.

Legge, a native of England, completed her first full season of racing in 2005, but has been racing since she was 9 years old. Even after this, she has no intention of stopping and plans to have her car rebuilt so she can race in Australia.

"You have to be a little bit different to drive a race car in the first place because it is dangerous, and it's one of those things you just accept," she said. "You know what, I would have got back in the race car and I would have finished the race if they would have been able to fix."