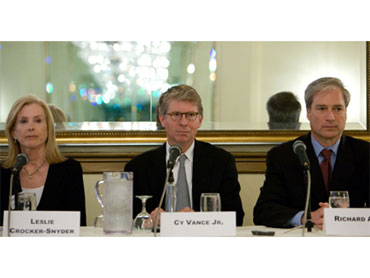 One is a former hard-nosed judge so known for her stiff sentences that drug dealers named a brand of heroin after her. Another enjoys the iconic incumbent's support and a political pedigree. A third is a noted gun-control advocate who boasts backers known for turning out voters.

They're vying for arguably the nation's most high-profile prosecutor job, now opening for the first time in 34 years.

Leslie Crocker Snyder, Cy Vance and Richard Aborn face off Tuesday in a Democratic primary that will effectively determine who replaces Manhattan District Attorney Robert Morgenthau. His office has dealt with defendants ranging from football star Plaxico Burress to the son of socialite Brooke Astor and has been the model for television's "Law & Order."

The race is one of the most closely watched contests in the city, partly because there's little drama in billionaire Mayor Michael Bloomberg's re-election bid. The interest also reflects the mystique surrounding the district attorney's post, filled by only two people in the last 67 years. Morgenthau, 90, has held office since 1975.

It's one of the busiest prosecutor offices in the country, with almost 500 lawyers and a docket that can include corporate titans, celebrities and mobsters. Alumni include Andrew Cuomo, the late John F. Kennedy Jr. and newly installed Supreme Court Justice Sonia Sotomayor. All three current candidates worked for the office more than 20 years ago.

With no Republican candidate, Tuesday's contest is expected to be decisive. Aborn has a guaranteed spot on the Working Families Party line on the November ballot but has said he will support whoever wins the Democratic nod.

Vance has raised more than $2.3 million, Snyder more than $2.2 million and Aborn more than $1.5 million as of Sept. 1, state campaign finance records show. Political experts say the outcome likely will hinge on which contender best mobilizes voters in what's expected to be a low-turnout election.

Morgenthau has endorsed Vance, a defense lawyer and litigator whose late father, Cyrus R. Vance, was secretary of state during the Jimmy Carter administration. The pick was in part a challenge to Snyder, who painted Morgenthau as over the hill in attempting to unseat him in 2005. She emerged with about 40 percent of the vote and his enduring enmity.

All three candidates are striving to claim a progressive mantle in a Democratic contest that comes with crime rates near historic lows. At a New York City Bar Association and New York Law Journal forum Thursday, they stressed their interest in sending some nonviolent offenders to treatment instead of jail and reducing the possibility of wrongful convictions.

With crime down from a 1990s peak, "we have an opportunity to push into these areas where we haven't before," Aborn said in an interview. "There's no reason we can't change the way we think about the district attorney's office."

Now 57 and the managing partner of a roughly 200-lawyer firm, he emphasizes his policy perspective, management experience and liberal bona fides. He underscores what he sees as prosecutors' need to confront racial disparities in law enforcement and calls himself "the candidate who's about lifting people up."

His opponents have noted that he hasn't tried a case to a verdict since 1992. Aborn says his management background is more relevant to running the DA's office.

There's no questioning Snyder's courtroom know-how. During 35 years in Manhattan courts, she was the first woman to prosecute a homicide in the borough, founded its sex crimes prosecution bureau, helped write a state law largely preventing rape victims' sexual histories from being raised in court and was a judge for 20 years.

Her reputation for toughness on the bench spurred death threats and a rash of heroin packets bearing her likeness and branded "25 to Life."

"I put my life on the line. ... My kids went to school with two cops each," said Snyder, 67, now a law firm partner, who would be Manhattan's first female D.A. if elected. "I'm a public servant, not a politician."

Her ideas for the D.A.'s office include pairing prosecutors with community leaders, educators, clerics and others to work on crime prevention in schools, housing developments and other settings.

She has taken criticism for changing her views on capital punishment. She formerly favored it in some instances, but now altogether opposes it; the death penalty has been ruled unconstitutional in New York.

Vance says he offers a broad resume and perspective gained from practicing in different settings.

He spent much of his career in Seattle, where his clients included thousands of women who reached a $72.5 million settlement with the Boeing Corp. in a gender discrimination suit and a former student who unsuccessfully sued a school district over his affair with his sixth-grade teacher, Mary Kay Letourneau. Vance, 55, returned in 2004 to his native New York, where he has served on a state sentencing reform panel.

Morgenthau named him "the best qualified, by his experience and his views." Endorsers also include fellow political scion Caroline Kennedy and the city's three major newspapers.

Vance's proposals include assigning prosecutors to focus on offenders with mental health problems and assigning teams of prosecutors to individual police precincts to drill down on crime patterns and prevention.

"Making us safer isn't just about how many convictions we achieve. It's also making us safer by engaging in effective crime prevention," he said.